My family and I (all 8 of us: 3 kids, 3 dogs, my husband, and I) were enjoying a movie in bed one Friday evening when all of a sudden we noticed our 6-month-old yellow Lab, Bennett, limping on his hind leg. We assumed his leg had fallen asleep so I took him outside to walk it off. After about 10 minutes it was apparent to us that something was wrong. Being the over protective parent I am, we immediately took him into the vet hospital. He did not show signs of pain and was just walking oddly on the leg, my husband and I assumed he sprained it.

The vet did a quick exam and said it was a strained CCL and he should be fine in a couple of days. He prescribed an anti-inflammatory and sent us on our way. During the ride home I felt unsettled by our visit and contacted my sister who was a vet tech for 15 years and happen to have worked at the same vet hospital we took our baby Ben to that night. She said she had never heard of a sprained CCL. To the internet I went (awful idea might I add) and her ‘diagnosis’ seemed valid. Later that week I called our regular vet and made an appointment that Friday. Within minutes of meeting our vet he gave us the unofficial diagnosis…torn CCL. My heart broke. How could my puppy be facing such a hardship 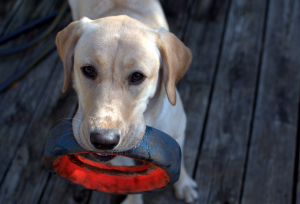 so early in life? How do I keep a puppy off his feet for 8+ weeks? How did this happen? Why did we not have any issues with his older brother from another litter? Could we have done something to prevent this?

A week later we met with the specialist, X-rays were taken and an official diagnosis was given. Then we were faced with some hard decisions, because he was not fully grown the only surgical option was only about 65% successful in full grown dogs. So we chose to wait until 9 1/2 months of age (3 1/2 months later) to allow his growth plates to fully form and we scheduled the TPLO surgery for Feb.

What a difficult time for baby Ben. We originally sedated him to keep him off his feet but that was heartbreaking. So after further discussion with our surgeon we decided natural calming sedatives (VetriScience Composure) would be best. He could still play but no “going crazy.” The damage was done and he was bound to have arthritis no matter what at this point. About a week before his surgery we had our first snow (we live in Seattle so a good snow does not happen often). We let him rip as a last hooray before puppy ‘jail’. He loved the snow and his leg didn’t slow him one bit, even the next day he was perfectly fine….so set in the “are we doing what is right?” We discussed long and hard….this is the best option for him.

Yep, his first Valentine’s Day was pretty crappy to say the least. I dropped him off at 8 a.m. with a bag full of things to keep him comfortable: his favorite blanket, toy, treats, antler bone. At about 2 p.m. he went into surgery and we got the all clear call around 5 p.m. that night. The doctor called later to fill us in, the surgery was a success, the CCL was completely torn (as was suspected in the X-rays), he was snoring away in the kennel and would be ready to go the next day.

We picked Bennett up around 2 p.m. Thankfully my husband was able to get off work to help with the pickup. I strongly suggest having someone there to help with getting them home; I was able to sit in the back with him and keep him from moving around and when we got home he was pretty excited to see his brother and sister, so it was good to have someone there to keep ahold of him while we let the dogs see each other.

That afternoon/night was pretty easy: he ate, peed, slept, and overall was calm. He was definitely sore and unhappy but he was home which brought him some comfort. He slept all night in the kennel next to our bed, no crying or whining which was surprising as he is used to sleeping on our bed with us.

So far so good, he does not like the bandage on his incision but the vet said to leave it there until the tape starts to come off. The medication is working well, we have kept a log as not to over or under dose him. Currently he is on pain medication, anti-inflammatory, and an anti-anxiety (sedation) medication. He is walking on his leg pretty well and even grabbed his favorite toy to chew on by the fireplace. Our first post-op appointment is not for another 2 weeks to check his incisions. No E-collar is needed as of now, but when left alone in his large kennel he will need it (at least until the 2-week mark when the incisions are fully healed).

All is going really well, keeping him from playing is of course our biggest hurdle. He is walking well on his leg and is back to a normal eating/drinking/bathroom routine. We did not need to use the E-collar as he has left his incisions alone, what a relief. We met with the surgeon and he was impressed with how well he is doing. He reminded us that he is not a fragile piece of china and that he can move around a bit as long as there is no jumping.

Our first set of X-rays post-op, the vet comes in with a smile and told us this is the last time he is going to see us. Being a puppy, he has healed much faster than anticipated and is about 90%. We were thrilled (especially our baby Ben, he absolutely hates the vet now).

We can officially take him for walks now. He is sitting square most of the time (a good sign according to the vet). He barely favors his recovering leg and with a bit of at-home rehab we will get him used to using that leg as he did before. Our hardest task has been weening him off his sedation medicine. We have been allowing him some more ‘rough’ play time with his older brother and there seems to be no sign of limping. I think in a couple of weeks he will be back to normal, finally!

Wow! He is back to a fully normal pup (minus some scars and a fear of the vet). We just had his annual exam and all seems to be great. We do notice after a long day of running/swimming he tends to get a little sore, with those times we just give him a half of an anti-inflammatory and he is good to go. We could not have asked for a better outcome, better vet hospital, and better doctor! The journey is long and hard but worth every moment (and dollars, all $6,000 of them) seeing him smile while he plays like a real dog!

-E-Collar: if you have time get your dog used to this beforehand. Put it on them a couple of times a day for a few minutes and make sure to reward them.
-Kennel: get a large enough kennel for the dog and e-collar.
-Gates: block off stairs and confine to a smaller room if possible, makes keeping an eye on them easier.
-Sedatives: as I said above; natural sedatives like VetriScience Composure or others are great alternatives to drugs. Especially as their activity level is increased with recovery.
-Medication Delivery: I am fortunate enough to work from home sometimes and to not be gone all day. But I do have 3 boys who participate in every sport under the sun, so sometimes we are gone when medication is needed to be administered. If this the case, I have an idea for you: purchase an automatic fish food feeder (AquaChef Aquarium Fish Feeder). I attached it to the roof of the kennel, set the timer to rotate at the needed medication time, placed the medication into dispenser and presto… the fish food feeder rotates and drops the treat in through the kennel grate and he gets his medication on time. Or if you are lucky your neighbor or friend stops by to help….probably easier.
-Keep them busy: for me it was pretty hard to imagine keeping my puppy busy without letting him play. So I purchased a few Kongs, stuffed them with canned food, threw them in the freezer, and he had a great snack that kept him busy for a while each time he was placed in the kennel. Additionally, I went to the dollar store and purchased tons of toys to keep him busy, once he pulled all the stuffing out then came another new one.
-And the most important tip I have: DO NOT STRESS OUT OVER THE LITTLE THINGS!!! Bennett was a puppy, he is going to get into things, he is going to play…my vet reassured me that it is rare with TPLO surgeries to have a relapse. Doing your best is all you can do.