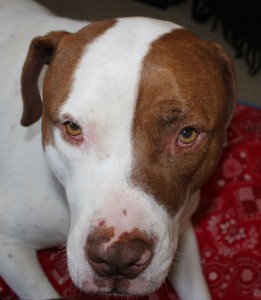 We have just hit the two month post operative mark and things seem to be progressing nicely for Tucker, although not as dramatic as I would have liked.  Following his traditional repair surgery for a torn cranial cruciate ligament, or CCL, we had a major setback involving a bacterial infection of his leg following his cast removal.  His leg has now healed from the infection, hair has grown back, but a pink scar remains below his surgical scar; an area that never healed in the crease of his ankle.  Our veterinarian informed us that he would be able to simply cut out the scarred tissue and sew around it, leaving only a small mark, but we are going to have to pass – the little mark does nothing to tarnish his appearance.

Tucker still does seem to favor his “good” leg following the operation.  While he uses the operative leg 100% of the time, he never does put an even amount of weight across the back legs.  I would not call his present stance “toe touching”, but you can see that he is not bearing the full weight of his body throughout the entire leg.  This is better than he was before we had the surgery, but I often wonder if we would have had the same outcome simply following CM for a longer period of time, or perhaps being more strict with conservative management.  None of this seems to bother him though, he is thoroughly enjoying his new, limited freedoms, and I think we are both looking forward to the day he can play in the backyard again with his brother.

We now are doing leashed walks for at least 30 minutes, roughly 3-4 times per week.  As the vet suggested, we have been going at Tucker’s pace, which translates into some days not actually getting off the couch, and other days needing to force him to call it quits.  Over the past month he has only limped on one occasion following a walk, and I attribute that to the cooler temperatures outside that day.  We have been having a difficult time trying to keep him down when guests come over to the house, and have resorted to again walling him off in a carpeted area of the house to prevent any type of injury to the knee.

His leg is still quite thin, although it looks much better now that the hair has grown back in across the leg.  I have been watching him closely to see any signs of a tear in his other leg, but so far, so good.  We did not have an appointment with the veterinarian at the 2 month post-op mark, but we will be seeing him again at three months, at which point we should be getting a fairly detailed exam done of both legs.