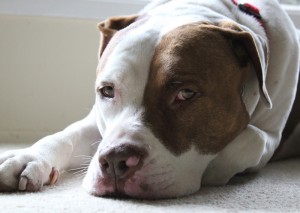 Things are starting to improve.  It has been one month (4 weeks) since Tucker had his traditional CCL repair knee surgery.  The skin on Tucker’s leg has almost fully healed following a bacterial infection of the leg post cast removal. The exception to the healing is an area about the size of one quarter, which is located in the crease of his ankle.  White and brown hairs are starting to grow back, and the leg is finally starting to look like a leg again.  We are now at one, ten minute walk per day, and he uses the leg with the same frequency as his other back leg.  He no longer holds the leg up, but he does some toe touching late in the day.

Tucker’s veterinarian is pleased with his progress following ccl surgery, and has now urged us to start exercising at his pace.  Since Tucker was a relatively lazy dog before the surgery, his only real advise was to take it slow.  He would prefer for us to err on the side of more frequent walks throughout the day rather than trying to do a whole lot at one time.  He highly recommends we get Tucker into our pool, or start taking him to the beach to try to build up the strength in his surgical leg.  We have been instructed to continue controlled, leash walking at all times, and he would like us to do this for at least the first 6 months after Tucker’s surgery, just to ensure he will not be engaging in any sort of activity that could jar the knee.

While observing his gait and sitting, the vet also noticed what I mentioned in my 3 week post.  He still does move his hips in a strange side to side motion when doing a slow walk, and he fully extends his leg straight when in a seated position.  The veterinarian feels that over time this awkward gait may change, that as the leg fully heals and scar tissue settles into the knee joint, his normal gait will be restored.  As for the position of his leg while seated, he was less confident that this would change over time.  He feels that since he learned to compensate for the discomfort of his knee by sitting that way, that he may just continue to sit that way because it feels better for his arthritis.

He is no longer on any type of medication, and we have decided against giving him Rimadyl (which the vet advised for the arthritic changes in his knee). The major reason we decided against the Rimadyl is the medications’s known effects on canine organs, including digestive and liver side effects; dogs taking Rimadyl need to constantly be monitored by a veterinarian for organ toxicity via blood work and physical exams.  He is back to taking a glucosamine and chondrointin supplement (right now he is taking Cosequin), and we are keeping him on the thin side, which mean less than 90 pounds for his svelte physique, by feeding him less dry food and more homemade lean meats.