You are here: Home › Conservative Management › Experience with a Knee Brace

Experience with a Knee Brace

As a last ditch effort during the end of our attempt at conservative management, my husband and I decided to try using a brace for Tucker’s knee to promote healing. Our view was that Tucker would appear to be making progress but then would take a misstep or be too active on leash and re-injure the knee. We felt that a brace for his stifle would not allow him to do such maneuvers and make it easier for the knee to form scar tissue and heal. After a bit of searching on the web we found a company called Woundwear that markets a knee brace for dogs known as the A-TraC Dynamic brace.

After a generous amount of email correspondence with Woundwear we decided that we would go ahead and get the brace for Tucker. We figured in the worst case scenario that we would at least be able to use it during his post-op recovery if we did need to have the surgery done. A few weeks and almost $400 later, the brace arrived via FedEx. I still can not figure out how/why a package weighing less than a pound can cost almost $20 to ship, but that was really the least of my concerns at that moment. The contents of the box are very daunting. There were about 10 different baggies containing different items such as velcro straps, clasps, harnesses and an actual knee brace.

After about an hour of putting all of the pieces together on the floor I was finally ready to fit Tucker with the brace. I guess I should not have been surprised when the brace did not fit. I mean, I had only sent about 10 emails to these people explaining Tucker’s physical structure, wanting to know if the brace would actually fit well on a canine as large as tucker with such large thighs. I was reassured multiple times that as long as I was giving them the proper bone measurements, which were obtained by our veterinarian from an x-ray, that there was no way I would have an issue with the stifle support brace not fitting. 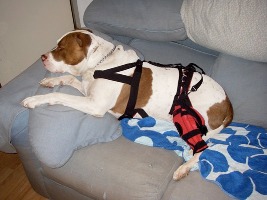 At this point I was not sure whether to cry or laugh. The whole get up looked like some sort of dominatrix costume, and here I was, trying to squeeze Tucker’s meaty leg into a knee brace that would not have slipped over a Chihuahua leg. Luckily Tucker has a good sense of humor and happily stood there, licking my face while I had a mini-breakdown, following me into the kitchen when I picked up the phone to call the veterinarian that runs Woundwear. Of course he was not directly available when I called so I had to leave a message, although I am happy to report that I received a return call within a few hours.

During our conversation I was told that yes, the size I had received was indeed too small for the dog I was trying to fit, and that they would send out a new brace the next day. They followed through on their promise and a new stifle portion of the brace arrived via FedEx within a few days. Much to my surprise the box contained another set of everything, I am still not sure if this was some sort of mistake, but I had a hunch that the items would come in handy and put them away for safekeeping.

The new brace at least went over Tucker’s knee, but that is about the best thing I have to say about it. The various straps needed to hold the brace on the knee are very clumsy and, because they need to be so tight, were constantly digging into Tucker’s buttox area and chest. He did his best to try and pretend that the doggy knee brace felt ok, but we could see right through it. He had a hard time walking with the brace on at first, and never was able to fully use his range of motion with the device on. I suppose that is part of the point of the brace, but all we saw was the discomfort it caused our dog and were very reluctant to use it. 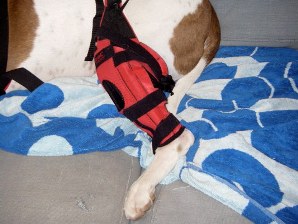 Tucker’s pretending to like the brace did not last long. A few days after getting it, while my husband and I were working in our office, Tucker snuck off, jumped up on the couch and bit off every last bit of the brace. He systematically chewed every one of the straps connecting the brace to his body, not leaving any material intact. To be honest, I was not the least bit shocked when I saw the shards of A Trac stifle brace littering the floor, as I mentioned earlier, I knew there was a reason I should hold on to the extra pieces that came with the second shipment.

We went ahead and used the spares to fit the brace back onto him, and from this point on we made sure his sneaky, spotty body did not leave our sight.

After a few weeks we totally gave up on the brace. It took two people and about 15 solid minutes to get the contraption on, and even when it seemed to be on securely, there was no way for us to tell whether any of the pieces were too tight. The material was rubbing off parts of Tucker’s fur in addition to cutting off his circulation when he laid down in certain positions. He hated it, and we hated making him wear it. I did contact the company to voice my discontent with their product and was informed of their fantastic “no refunds” policy. So not only were we stuck with taking a $400 hit to the pocketbook, the brace was so unbelievably uncomfortable that we could not imagine forcing him to wear it during his recovery from surgery.

An Update on Dog Knee Braces:

Since writing this post a number of different braces have come onto the market, with different uses and best fit scenarios. While I may not have personally had the best experience with the A-Trac brace, there are many other owners out there who have found it to be an absolutely wonderful device.

I encourage you to visit the Dog Knee Brace section of this site and read other owner’s experiences before you decide on which brace is the best suited for your pet.