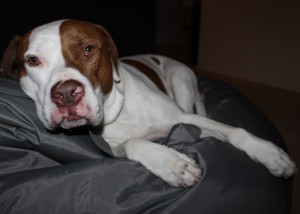 The past week has been filled with ups and downs.  The first few days following surgery were very (even eerily) quiet, with Tucker being sedated 24/7.  He is taking Tramadol for pain management, an antibiotic – Cephalexin, and Acepromazine for sedation.  We had no idea how hard it would be for us to see our big guy so out of it, but we just have to keep reminding ourselves that it is his best shot at a full recovery. Everyone has been really supportive and helpful during this process. Our neighbors brought us some homemade dinner, relatives have sent their well-wishes, friends have brought over videos for our nights in with Tuck, and big brother Guapo has been doing an excellent job keeping him company; we often find the two of them cuddled together.

Sneaky to the bone, Tucker has caught on to us spiking his meals with meds. In response to this, we have taken to providing a post-meal treat of either peanut butter or hummus.  He has tolerated all of the medications well, and the only side effects of note are increased drooling and excessive licking.  Then 10 day antibiotic cycle is drawing to a close, and the next step will be weaning him off of the Tramadol.

There have been some bladder control issues, but I believe this stems from Tucker not wanting to expend energy to actually get up and go outside.  This problem is easily remedied with numerous blankets and sheets placed on top of plastic bags.  I find myself doing at least two loads of laundry per day to ensure his recovery area remains clean and dry.  I am a bit concerned that his cast may get wet during one of these accidents, but that has not happened thus far, and he will be having the cast removed next week.

We had our first post operative vet visit, and the surgeon seems pleased with Tucker’s progress to this point.  When he gets up to use the potty he is starting to use the casted leg with slight weight.  He does not seem to be in any pain or discomfort, and does not display any aversion to the leg.  The veterinarian also pulled a bit of the cast away at the top of his leg and assured us that his skin looked good underneath; he is confident that next week Tucker will be ready to have the cast removed and we can start doing very brief walks.

We have baby gates up all over the house and carpets laid down in areas where Tucker is allowed to walk, but even the most carefully thought out plans can fail.  On the fifth day after his surgery, one of the baby gates was mistakenly left down, and Tucker was able to get into a previously closed off room of the house.  In this room is his favorite chair, a ratty old recliner, perfectly molded to his body.  So, doing what anyone seeing their favorite chair would do, he attempted to jump into the chair!  I caught him just has he was leaving the ground and did what I could to ensure he would not fall.  Much to my surprise he got into the chair with no problem, and did not appear injured when I inspected him closely (thank goodness).  Lesson learned – do not trust a sneaky, doped up dog not to find and jump into their favorite chair, even with a giant purple cast on their leg.