Initially we tried conservative management with my pit/shepherd mix Blu because I did not want to put him through surgery. We had some success with that for about a year until I got another dog and he reinjured it rough housing. We tried CM again but this time he wasn’t improving so we made the tough decision and my baby had TPLO on 9/29/16; tomorrow will be 6 weeks in.

He developed an infection week 1 and was put on 2 different antibiotics. He seemed to be improving by week 3 and he was using his leg pretty regularly so we started him on physical therapy. The therapist said he was doing great and we were feeling pretty good about our decision until a couple days later when he stopped using his leg all together. We went to the emergency vet because he was lying on his pillow shaking and she said she thought he had an infection. Because he wasn’t 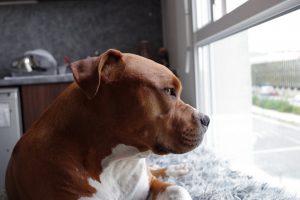 responding to the antibiotics she thought exploratory surgery would be appropriate. I wasn’t about to put him through that unless the surgeon recommended it so we packed him up and drove back to where he had his surgery. We waited for 3 hours to see a fill in for the surgeon who was on medical leave. The Dr. tried aspirating fluid from 3 different spots in his leg but didn’t get anything so he thought he may have just slipped and hurt it and would be back to normal in a few days. We left with some Metacam and Tramadol relieved.

A few days later he was not any better and completely lame so we went and saw another vet filling in for the surgeon. This time the Dr. successfully aspirated fluid and put him on another round of antibiotics (Chloramphenicol) and said we would see a big improvement within a few days. A few days later he was improving slower than we were told so we took him back to the vet this time seeing the Dr. who did his surgery. The results had come back from the culture done during our previous visit and we were told he had a staph infection but not the resistant kind. The vet did x-rays, said everything looked good and we were given another week of Chloramphenicol. He said if that didn’t work they may have to take the plate out and then he sent us on our way.

About 4 days later he started using his leg about 50% and slowly improved from there for a few days so I was thrilled until this past Sunday he went completely lame again. He seems fine other than the fact that he’s not using his leg but I am taking him to the vet again this evening to be safe. I have read a lot of other posts on this site that are extremely disheartening and I am beside myself with worry. My question is has anyone had a similar experience and could it be he’s just recovering slower than most dogs? If there is anyone who can help ease my mind I would really appreciate it.