My 6-and-half-year-old Pembroke Welsh Corgi, Juni, injured his left hind leg last Monday. He was jumping on and off from the couch and just like that, he started to walk with his 3 legs and had his injured leg up. He was not crying or mourning…But still, he was hopping like a kangaroo! We rushed him to our vet cuz I was freaking out! The vet had an x-ray done and told us Juni does not have any fracture or dislocation, but most likely he hurt his ligament. Thus, she prescribed us Rimadyl 25mg and told us to give him 2 weeks of resting. If it’s a ligament issue, for smaller dogs, they should be able to recover themselves (Juni is about 26 pounds, kind of a chubby guy and because he’s a corgi, he has shorter legs). So we went home with the prescription and gave him lots of rest. 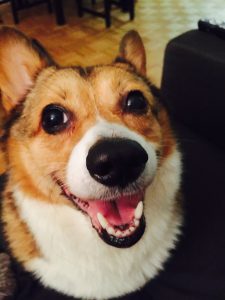 For about a week, he got a little bit better that he’s putting some weight on that injured leg. But we were still worried that if it’s something more serious. So we visited another specialist, he took Juni in and did some examination without us presenting there, and came back and told us that Juni had a torn ACL and he recommended TPLO surgery. He was saying that Juni is not a small dog and kind of active (he is more of a medium size). So TPLO should work better for him. My husband and I were really scared and just made an appointment right away with the specialist for the surgery.

However, we came back home and did lots of research online, especially on this website and Tigger website, and we decided to cancel the surgery and give Juni another 6 weeks just to see if he could heal on himself. I’m always a conservative management person. He is on Rimadyl 2 pills per day, and we want to get that off soon. We just purchased a brace, a stroller, and Glucosamine supplement. We will also limit his activity during these weeks. This is gonna be a battlefield! We will fight for this together! Ever since this happened, I was crying when I saw him hopping like that. Seems like Juni was kind of discouraged as well! So we gonna make sure we all gonna be positive about it! I will be on a business trip for 2 weeks and won’t be back until the beginning of Dec, but my husband will be with Juni and keep me updated. So hopefully, when I get back, he will be able to walk as normal or better!

One Response to Conservative Management – Juni