You are here: Home â€ş Dog Knee Brace from Orthopets

A reader of Dog Knee Injury has graciously offered to share her dog Fargo’s story and share their experiences with Conservative Management. When Fargo’s owner first contacted me in February, 2010 she wrote:

“Our 11-year old yellow lab, Fargo, tore his ACL on February 4, 2010. I called the vet and he asked, “Did he go outside as a four-legged dog and return as a three-legged dog?” Which explained it precisely. We considered surgery, but, after days of research, I read about the extreme failure rate of surgery and it scared me. I stumbled upon a website called tiggerpoz.com that made so much sense. It recommended Conservative Management so, with great hope, we tried that for two months. He seemed much better as time went by, but then he would end up back at square one for some reason. I must confess we considered euthanasia because Fargo’s quality of life was not good. I went back to tiggerpoz’s website and found information on a fantastic knee brace from Orthopets. The info and videos on their website are amazing. So, I am ordering a stifle (knee) brace for our dog tomorrow. My vet or I will make a cast so the brace fits perfectly. I’ve been in touch with the owners themselves by email and they are very quick to get back to me and seem very caring. I cannot wait until Fargo can go for walks and go swimming again.”

Fargo has since been fitted for his Orthopets brace, and received it on 4/23. His owner has reported that he seems to be doing well with the brace, and the pictures below are of Fargo wearing the brace. I was unsure how the brace managed to stay up without being strapped to the dog in any way, but Fargo’s owner said that the brace stays up because of the velcro straps above the hock and around the knee – there are also auxillary straps on the thigh. 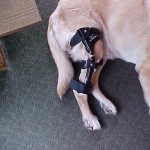 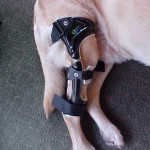 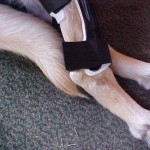 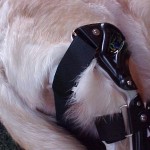 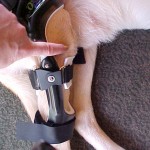