Noelle is a 5-year-old female German Shepherd/Lab mix. On Dec. 23 she came home limping from our yard. She was holding her rear left leg up. Next morning we let her go in the yard and she started running around but again came home limping. We didn’t restrict her a lot since we didn’t know what was causing her to limp. We started walking her on leash but allowed her go up and down the stairs inside the house. Two weeks passed but she didn’t seem to get better with her limp, so we took her to a vet on Jan 9. The vet told us that it might be a cruciate ligament rupture and needed to take an x-ray to confirm. I got confused and asked for some time to think. The vet prescribed Rimadyl 75mg twice a day for 5 days and Noelle was restricted to limited activities only. Later, I got an appointment for an x-ray on Jan 16. 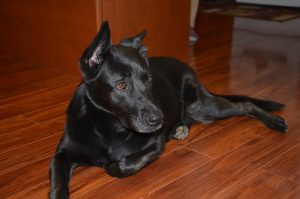 After the vet took the x-ray, she recommended a few surgeons for TPLO and told us that it will cost $3,000- $4,000 and continued with Rimadyl for another week. After that we started calling hospitals to get estimates. Meanwhile, me and my husband started Googling about ACL injuries. After reading through the information, experiences, and advice, I started looking for more information about ACL injury and recovery without surgery. I was surprised with the information provided on your site and am very glad that we didn’t rush Noelle into surgery. We also stopped giving her Rimadyl and got her started on a Glucosamine booster supplement which has 600mg Glucosamine and 200mg Chondroitin.

For 2 weeks noelle was restricted with her activities and she started showing improvement. She started putting a little body weight on her rear left leg while walking. Based on the information on the site, I knew that I have to be patient with the recovery. Even though Noelle showed little improvement I was not sure whether I am doing the right thing for her or not. I was feeling guilty too. After reading all the experiences and success stories about CM I was hoping that Noelle could be one of them. We restricted her activity a lot. She was not allowed on stairs, no jumping, only leash walk 7-8 times a day for maximum of 5-10 minutes each. I changed her food gradually to healthy weight dog formula which has Glucosamine and Chondrotin, started giving her one boiled egg everyday, and added GlycoFlex3 to her diet. Everything together seemed to have worked for Noelle. We gradually 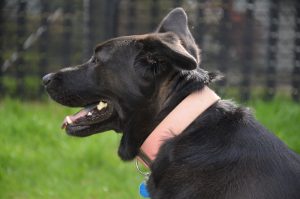 Now, we have started walking her 40 minutes in the morning and half an hour in the evening. During the day 5 minute walks 2-3 times. She is totally fine and very much recovered. NO MORE limping. She walks perfectly fine and uses her injured leg as her earlier normal self. We are so happy that she is perfectly fine now and we are glad that we didn’t put her under knife!! Just to be safe, she is only on leash walks. We don’t send her in the yard on her own and still she is not allowed to play with any other dog. I think I will wait for 4 more months for Noelle to play with her husky friend.