You are here: Home › Simitri Success – Harley and Rudy 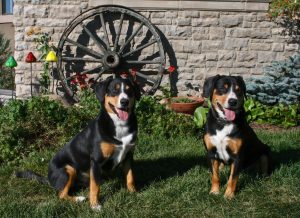 Living out in the country we have always had very active, high energy dogs and because they are so active, just like many athletes, we have experienced injuries unfortunately.  The first time we experienced a knee injury was with our late dog named Crosby.  Crosby during his lifetime had three knee surgeries, two of them being TPLO surgeries and one cruciate surgery.  These were performed in 2004-2006.  Crosby had to have one TPLO surgery redone as he was still having problems with his knee after the first surgery.  Crosby did very well with all his surgeries and was able to walk and weight bear on all four legs, however, he never really did recover 100% and was somewhat limited to his activity after having his surgeries.

We now have two more very active dogs, Harley and Rudy.  Harley was diagnosed with a knee injury in the spring of 2016, where he had completely tore his cruciate.  At this time, our vet knew we were familiar with knee surgeries from past experiences with Crosby, and he told us about this new surgery, Simitri Stable in Stride surgery, by Dr. Neil Embleton.  Because our dog Harley was an extremely active dog, our vet knew that the recovery process would not be easy with him and that Harley was also not going to be gentle with his newly transformed knee no matter which procedure of surgery we decided on.  Our vet asked us to talk with Dr. Embleton and to also research the Simitri surgery before we made our decision on which type of surgery we felt would be best for Harley.  After talking with Dr. Embleton and researching the Simitri surgery we decided that this option, if it was successful, would probably be our best option for Harley as he was still very young at 7 years old and very active.

Harley had his Simitri Stable in Stride surgery in June 2016.  By the second day after Harley’s surgery 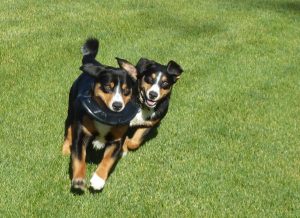 he was already weight bearing on all four legs.  We knew from experience that the post operative care is crucial for a successful recovery, and with Dr. Embleton’s very detailed and descriptive care instructions we did our best to perform the massage and exercises as described in the handout.  Within a couple weeks of surgery, Harley was raring to go, which was good and bad.  Now it was trying to contain his energy for another 3-4 months to slowly regain his strength and let the surgery fully heal.  In the fall of 2016 Harley was through his recovery period from the surgery and was doing extremely well.  It has now been 8 months since Harley’s Simitri surgery and you would not know that he has both a femoral and a tibial plate in his leg, as he walks and runs just as he had done before his injury.  He has regained all his muscle back and his full range of motion.  The Simitri surgery was a complete success.

Late this fall we were then informed that our youngest dog, Rudy, tore his cruciate as well.  This was definitely not news we wanted to hear as we had just finished with Harley’s recovery, however, with experiencing the success of the Simitri surgery that Harley had, there was no question that we would have the Simitri surgery performed on Rudy as well.  Rudy had his Simitri surgery January 4, 2017 and we are almost half way through his recovery process at this moment.  He has been weight bearing on all four legs and has been very successful at getting his range of motion back.  So far Rudy is looking like he will have a very successful recovery as well.  Dr. Embleton has been extremely helpful after both surgeries with our dogs and has been very involved with the progress of both Harley and Rudy and is always there for us if we have any questions or concerns.  We are very thankful that we chose this surgery for both Harley and Rudy and look forward to many more healthy and happy years with our dogs.

One Response to Simitri Success – Harley and Rudy