Overall, this has been a good week and not as terrible as I imagined. By the third day, he no longer dragged his toes and was actually putting some pressure on the leg. We applied a cold compress to ice his knee area four and five times a day, but are not doing any passive range of motion exercises yet. He is able to lay himself down much more easily. His incision is healing nicely, he is leaving it alone so far. 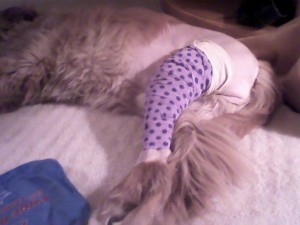 However, we did have one mild setback. On the fourth day post op, I noticed his ankle was slightly swollen and bruised. By the end of the day, it was very swollen. We were worried he’d somehow managed to sprain it, but a check in with the vet indicated that he had edema, a fluid build up just like a pregnant woman in her ninth month! The treatment for this was massaging around the fluid areas and cold compresses on the area. The edema was resolved in just a couple of days. Throughout the week, we continued to sedate him with the Acepromozine and relieve pain with Metacam and Tramadol. Due to the edema, we also added an antibiotic since the fluid would be a breading ground for infection. These medicines, combined with the thyroid medicine he has been taking for some time, take some work to keep straight. I hate giving him so many drugs and can’t wait to be done with that part.

We are also learning that Beau is not going to be a good patient when it comes to following doctor’s orders. He desperately wants on the couch and succeeded one time when someone forgot to put back the big blockades we have rigged. Although he “never” goes upstairs unless we do, he tried when we weren’t looking…. so now that is blocked off too. He made it up the first three steps before my husband caught him and scooped all 79 lbs of him off the step. When the Acepromozine wears off, he’s ready to be in full blast mode. What are we going to do when he starts feeling better?