You are here: Home › TTA Surgery and CM – Ben’s Story

By Mandie on May 28, 2010 in Dog Knee Surgery, Owner Experiences

Ben is a 4 year old Standard Schnauzer. We believe he suffered a partial tear in his Left CCL in December 2008. We didn’t give CM (Conservative Management) a chance until about July 2009, when he was diagnosed with a CCL tear. Prior to that, it only appeared to be a minor injury. Since July 2009 when we started CM, Ben would start walking and standing normally, but would often suffer set back after set back. I will be the first to admit that most of the set backs were due to my stupidity. I guess it could be argued we never gave CM a chance.

A few weeks ago, we gave up and did some more research. The Vet indicated that he could be healed through CM, but if we wanted him to be the athletic dog he used be, then he would need surgery. Ben was/is my hiking buddy and used to go on 7-8 mile hikes in the Utah Mtns all the time. He could run for hours and hours without taking a break. The Vet believed he would never be able to do that through CM without being down the rest of the day and/or next day. We scheduled him for TTA surgery with an Orthopedic surgeon that is believed to be the best in Utah, if not the best in West. From our research, the TTA surgery appears to be far superior to the TPLO. Dogs tend to be healed within 3-4 months. Also, they tend to be weight bearing on the leg within 24-48 hours. Within 2 weeks, some dogs are pain free.

Ben made it through surgery just fine today. The Orthopedic surgeon called us and indicated to our surprise that Ben had a complete tear in his CCL and the Meniscus was completely torn as well. If I knew he had that much damage, I think we would have scheduled surgery much sooner. The Orthopedic Surgeon did tell us that he does not believe Ben will suffer anymore arthritis than normal because of our delay in scheduling surgery. His joint appeared to be clean with only minor swelling. The surgeon believed his recovery will be just as good as if we scheduled him back in 7/09.

At this point it is anyone’s guess if he would be better or worse with CM. As of now, we have the peace of mind that knowing the end is near. With CM, we never knew when the road would end. I will post updates on Ben’s recovery over the next several weeks. 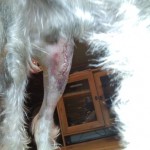 Day 1 (after TTA surgery)
When I picked Ben up from the Vet, he was completely opposite from what I expected. I expected a dog that looked like he had been to hell and back. Instead, Ben was dragging the Vet tech into the room. As we were talking to the Vet, he sat on his leg that just had surgery. The Vet was impressed with the very little swelling around Ben’s leg. As we walked outside, he was practically dragging me to the car. His spirits are completely high, and looked like he wanted to go play.

As we were getting into the car, I was planning on picking him up and placing him inside the car. Instead, I opened the door and he leaped into the car. He missed and gave me a complete heart attack. I caught him as he was falling to the ground. I expected him to cry out in pain, but he acted like nothing was wrong. Once inside the car, he was jumping from seat to seat like nothing was wrong. Once he was home, he immediately went for his food.

At this point he is just toe touching on the leg with the surgery, but he is getting around fabulous on his 3 legs. About 5 hours later, I took him for his first walk. We walked past a few houses before we turned around. As we got close to home, I noticed he started walking on his leg. He continued to walk on it (with a limp) the rest of the evening!!!!!! It looks like my biggest challenge at this point will be keeping him under control so that he can heal properly.