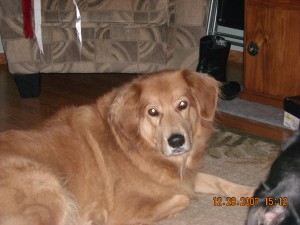 About 2-3 weeks ago I noticed my 9 yr old golden retriever, Beau wasn’t using his left hind leg. He wouldn’t move and stopped eating(which is weird because he is very food motivated). At first i thought it was his hip dyplasia acting up, but those episodes normally only last for a few days. As I was getting ready to take him to the new vet, I found liquid black, tarry diarrhea all over the basement.

To say I panicked would be an understatement. I started crying hysterically and worrying about having to put him down. Well come to find out he had a stomach ulcer which was caused by the increased aspirin regimen which was prescribed by his old vet! I was so irate. But our new vet quickly calmed me down. She prescribed Tramadol for pain, Famotidine as an antacid, Flagyl as an antibiotic, and Sulcrafate to coat his ulcer. 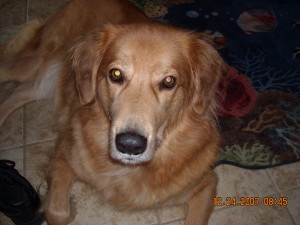 Beau was now officially an old man. Within the next few days Beau started to smile at me again. He began eating again, however his leg was still bothering him. I knew it was something other than the hip dysplasia. So we went back to the vet a week later. She sedated him and x-rayed his hips and legs. That when we found out he had a torn ACL (or CCL, cranial cruciate ligament in dog knees).

Surgery isn’t an option because I don’t have that kind of money and Beau is too old. I would hate for him not to wake back up. I am switching him over to the raw food diet, which he loves. He is still on Tramadol. We are going to switch him to a NSAID once his tummy has had enough time to heal. Today (June 9th) he used his hurt leg for the first time in almost 3 weeks. My baby boy my never be able to walk normally again but I will do everything in my power to help him become as “normal” as possible.