The following was submitted by an owner whose dog had a failed Tightrope CCL repair procedure:

Our ten year old Husky, about 75 lbs. went lame in her back leg after repeatedly climbing our new chain-link fence and chasing neighborhood cats. Our vet recommended the new tightrope surgery to repair her torn CCL as less costly and less invasive. To keep our options open he did tell us about all the procedures currently being done. However, since he did not actually preform TPLO and we’d have to go to a board of surgeons to have this more expensive TPLO surgery done we opted to have the tightrope procedure done at the end of March ’10.

We thought we were prepared for the restrictions, and had no idea the extent of the complications, as we had not done our homework. We just took the word of the expert. Statistically, I think we had all the bad Tightrope surgery complications, and then some. 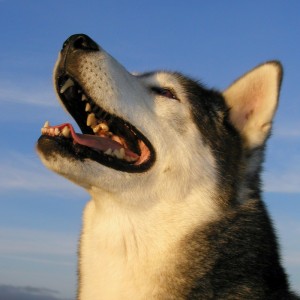 At the end of the 2nd week post-operatively we discovered when we went to get her stitches out, there was instability in the leg again. Something about the tightrope had failed and failed quickly. In addition, three, what appeared to be seromas or limpomas, had formed at various places along the incision. One on the upper inside, one on the outside just along the stitch, and the final further back on her outside hip. The one along the stitch continued to grow.

The vet at week 3 post-op recommended a second surgery saying, “Let’s go in see what is happening with the tightrope and look at the seroma”. (it turned out not to be a sermoa as it was not fluid filled and must be something else) We prepared for a 2nd tightrope ligament repair surgery, in case it was needed. Sure enough the first tightrope was “loose” with no explanation. It had been tight during surgery and one week post op. The buttons were fine and the knots tight. It was just loose. He removed the loose tightrope, drilled new holes at a slight angle this time, put in the 2nd tightrope and removed the largest growth – a golfball sized granuloma laying along the lateral side of the tightrope but not directly encasing it.

The granuloma was caused by a foreign body (triggered by either the suture material or tightrope) and it had a highly resistant staph infection in it. We found out 7 days after the second surgery when the pathology report came back. All the little antibiotics we’d given her for the past month had no effect. We had to start her on clindemycin which was one of two antibiotics that the staph was not resistant to. My concern was the whole week the new tightrope was in, and we did not know a staph infection was present.

Three weeks out after this second surgery her leg again tested with a draw sign that it had become unstable again. Why? The vet recommended a third surgery. He went in and the tight rope was secure and tight, so what was the instability? Her menicus on one side in her knee had torn and flipped. She’d not exhibited the normal pain this should have caused so the vet had no reason to suspect prior to this 3rd surgery. This slight damage to this cushion is what had shown up as instability when he did the drawer sign before the 3rd CCL surgery. 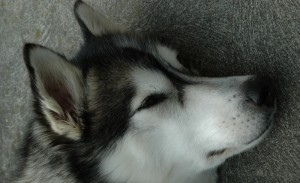 He was also glad that at surgery #2 he’d not opened the knee joint to look because for sure he would have spread the staph infection to the joint when so far it had been along the surface of her leg. We didn’t know that at the time, but looking back it was probably a good thing. He cut and removed the damaged menicus and released the lateral one. Then he also put in another stabilizing feature – the original Extracapsular Technique, also known as a traditional repair. This would give our girl two stabilizing features: the second tightrope that was still intact and the new lateral stabilizing suture (extracaspular) and they would not interfere with one another. We had high hopes.

For another month (this would be two months of antibiotics, a total of 3 different kinds before we got to the 4th for the staph infection) we had her on antiobitics following this 3rd surgery. At week 3 post op, of the 3rd surgery, she was still stable but she developed a horrible yeast infection in her ears that we also had to begin treating her for. We think this was probably caused by all the antiobitics. We finished the third and final round of antibiotics at week 4, believing the staph infection totally destroyed. How could it not be after that hit with antiobitics… 30 days?!

However, one week after she went off antibiotics in week 5 the instability seemed to be coming back, and each day we watched her use that leg less and less. She walked in a stilted way with a hitch and thunk look (no sound). It began to shake as she lifted it. Day after day we watched this get worse… thinking surely not, surely it’s just today. Finally we called and the vet said only time, let’s give it more time. Week 6 post-op of the third surgery she refused to use the leg at all and it was a little puffy. The next day it was more firmly swollen from the hock to the crest of her knee. She hiked it up and hopped on the other… something she had not done since before the first surgery.

Back to the vet who said that the leg was again more unstable and that apparently both stabilizing features had failed. We put her back on antibiotics and steroids for the swelling.

1) TPLO
We don’t have an additional $3500 for a more invasive surgery on a less than pristine leg that has already had 3 surgeries and known complications from infections including staph. I don’t know that bone healing or foreign body reaction would be any better with metal plates and cutting her bones.

2) (Another) Tightrope
Why do another tightrope surgery when we’ve failed each one. No one can tell me why it failed and failed quickly. She’s remained totally restricted, very very very little activity… walks to eat and leash walking to the bathroom. There was some talk about her soft tissue not healing well and that’s just her so that’s the cause of the failure and instability. That’s the guess. It still seems strange that soft tissue could cause an fibrous material like the tightrope which is supposed to be so strong and durable to weaken after a couple weeks in her body more than once.

3) Conservative Management – Rest and Medication
Time and medicine we can do, but the problem is her leg, the bone to bone action is again unstable. So give her antibiotics for two weeks and fix the swelling or infection. But when she goes off of it the instability is still there to again cause damage that would cause swelling again requiring more medicine. The endless cycle. I also wonder if the tightrope itself does not now have staph in it and will continue without constant antibiotic to infect her leg every time. 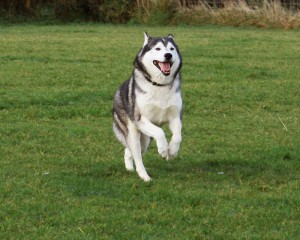 I don’t know that it would have been any different if we’d gone with the TPLO first. Our vet has helped us with the cost of the second and third surgeries, but the cost to our family emotionally had been huge. As someone else in here said… any surgery has risks. My vet has done 10 tightropes in the past spring and ours was the only failure… 10% chance doesn’t sound like much until your dog is the 10% one.

It is disheartening. It has taken time off work. Patience from everyone in the family who have had to pitch in to help. It hurts to watch your dog-companion in pain, not understanding and restricted. A friend told me my dog was tough and just to hang in there. She said if my dog has to be a lap dog and hang out in the house for the rest of her life that’s okay. Besides she’s just about to turn 11 so she’s not in the prime of her life. And I worry… what if she’s in the 50% who blow out the other leg? My mother would say I’m borrowing trouble to even think about it. She’d also be one of the first realistic ones to say it may come to putting her down. Gosh it would be easier to not have to go through this. But we love our furry friends. And that’s not so easy. We don’t give up that easy do we? It has been one of the most horrible long-term experiences of my life.

We are at 6 weeks post-op surgery #3 with a swollen, infected and mostly useless leg. But we’re giving medicine, food, love and prayers. I believe the medicine will help. I’m not sure what next steps will be. But today. That’s all we’re really promised anyone. Today – we’re hanging in there together.

UPDATE – 7 Weeks Post Op
During the third surgery, they did add the Extracapsular repair. When we talked with the vet this week he believes the Tightrope & Extracapsular are still intact, but that the isometry of her leg causes a shift that keeps them from holding the knee completely stable. It will make the scaring, tightening process slower. Her swelling has gone down on this round of antibiotics and steroids, which we’ll decrease over the next week. She’s walking on it a little more in this post op week #7 and resting a lot.