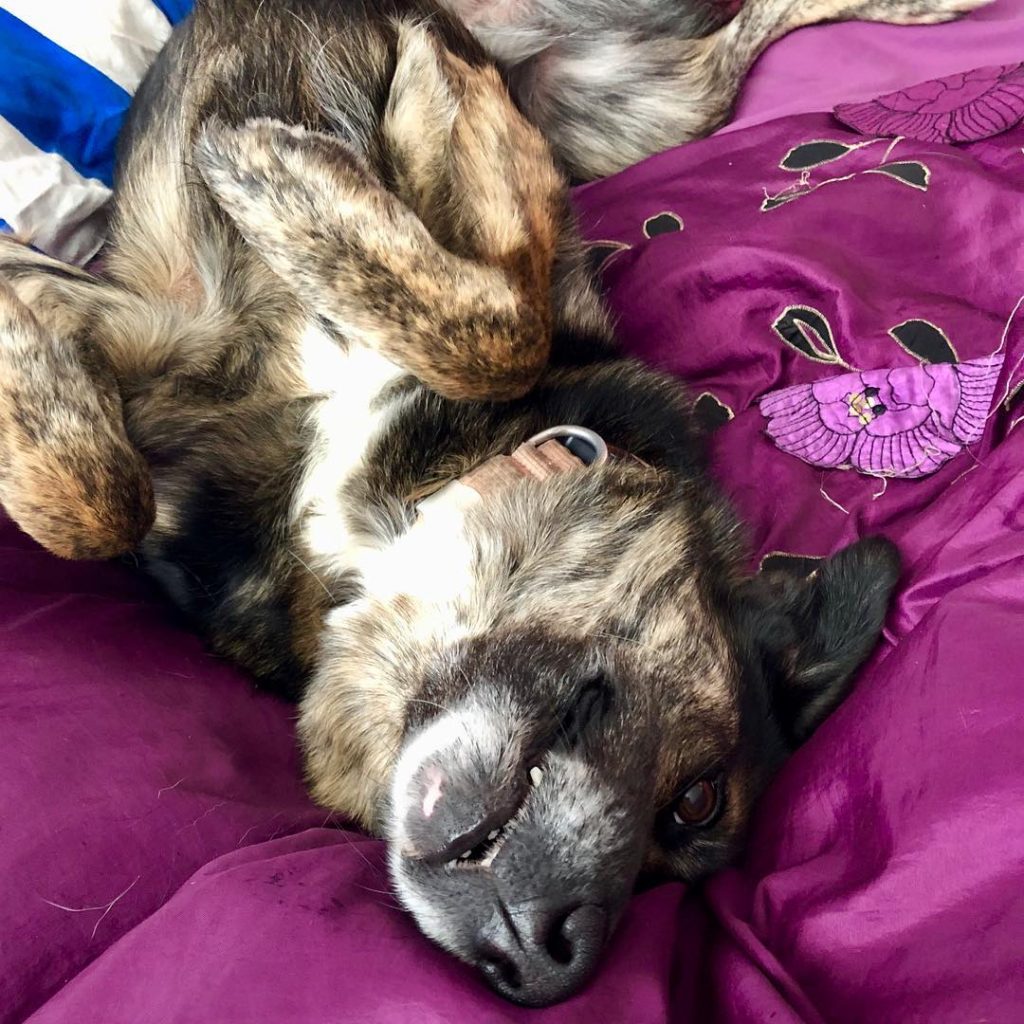 My little 4 year old border collie x Labrador Mishka tore her CCL 10 weeks ago. She was outside absolutely fine and running around and then all of a sudden when I went to bring her dinner, she was limping around with a foot that refused to touch the ground. I was concerned, but assumed it would go away. It wasn’t until I tried to take her for a short walk the next day and she nearly fell over trying to go to the toilet because she didn’t want to put the leg down, that I realized how badly she had injured herself. I took her to the vet immediately, and as soon as they saw me walking in with her all of the vet nurses knew that there was a very good chance she had torn her crucial ligament.

The vet saw her and had a look at her and confirmed it was the knee ( which I already knew because I had gently run up from her foot to the top of her leg squeezing lightly until she told me where it hurt the night before ) and said they needed to take x-rays the next day to be sure it wasn’t a fracture. The next day after the X-rays they brought us in and explained what we were looking at. A large area of fluid in the x-rays indicated that she almost certainly had ligament damage, and they went over the options with us. Because Mishka is a medium to large dog weighing 24kg at the time, the vet pretty much told us that TPLO surgery was easily the best option and that she was highly unlikely to recover without it. I didn’t know anything about conservative management back then, however I have been seeing the same vet doctors since my previous dog 20 years ago and I have always trusted their opinion, and I know they would be honest if they thought we could have avoided surgery.

We had the surgery but I had no idea what I was in for, I still get upset when I think about how much she cried the first night we brought her home. She absolutely never cries, even when she is in pain she is usually quiet about it so bringing her home from surgery and having her crying all night was absolute torture. I took her back to the vet, and they said they could give her medication which would relax her, but advised us to avoid it at all costs because it would mean she would feel even less like herself. The next day she calmed down significantly and we found she didn’t need any medication to help with that.

The first two weeks, where she had to spend every moment confined to her crate taken out only for food and for bathroom breaks was awful. However, the few weeks after that were much better when we carried her to sit either on the couch or my bed when she was supervised, and on a leash. She learnt quickly that sitting there cuddling was only allowed if she remained still and didn’t try to jump down. Another difficulty we had was keeping her and our other labrador apart. He didn’t seem to recognize what was going on and was unaware of his size, and would often nearly sit on her leg without noticing. He also got very upset at the attention Mishka was getting, and we were conscious of trying to avoid him feeling neglected.

After the 8 weeks of recovery, she had healed very well (the vets say one of the most successful CCL recoveries they have ever seen, from when they said she had the worst angle in her bones they had ever seen originally).

We were warned to let her have normal activity, but not to over do it. Unfortunately, she does not know how to exist without overdoing it, and 10 weeks later from the original surgery here we are and she has a slight tear in the second knee which we were expecting at some point. I’m almost relieved that it has happened to her again now and we will be over and done with the invasive surgeries and the pain of confinement soon – although the financial shock of two massive surgeries two months apart, the first one being before Christmas, did not help the stress of the entire situation. I am very nervous to bring her home tomorrow and I am praying she won’t be crying as much as the first time.

If anyone has any advice for what we can do better the second time around to make it easier on Mishka and on us I would love to know. I have learnt so much through this website and am feeling a lot more confident in my abilities to take better care of her this time around. She is a bit big for a dog pram but I am trying to think of ways to keep her from feeling depressed and bored during confinement. She had little interest in her kong toys last time around, even when they were filled with food.

For others with a highly energetic dog that is medium or large sized and that gets frustrated easily especially when away from people – do not by any means get a soft crate!! Mishka absolutely hated it, figured out how to get holes in it if she rubbed her cone collar continuously in the same spot (very clever pup) and tore it to pieces, escaped from it two or three times and would get very stressed when she couldn’t see us through the windows. We switched to a metal cage crate and she was hesitant at the start, but didn’t seem to mind it much at all after a while – particularly because she could watch everything we were doing more easily.

My questions to anyone else as well – has anyone had any complications after both legs have had TPLO surgery? Has anyone else had both so close together? We have been assured that her original surgery leg is strong enough to bear all of her weight now and she has a very minuscule chance of anything stopping her positive progress now.

Will we ever be able to throw the ball with her again – even if it is in a year’s time ?? I don’t know if I can ever get that strong chase instinct out of her mind. What are some activities we can do with her or ways that we can prevent her from getting bored during her intense stage of recovery?

I hope that someone else finds comfort in Mishka’s story, the way I have found comfort in other people sharing their journeys. I hope to keep you updated on Mishka’s journey ahead 🙂