TPLO, also known as Tibial Plateau Leveling Osteotomy, is a surgical procedure in which the head of the tibia is surgically altered and plated to create a new joint angle. A new angle is created in the stifle to prevent the femur from sliding off of the tibia. This is a very invasive procedure, as it involved the surgical cutting and plating of bone, and as with all surgery, there is a risk of both operative and post operative complications which need to be taken into consideration before going forward with a TPLO.

How the TPLO procedure is performed:

First, the torn ends of the cranial cruciate ligament will be completely removed by the surgeon. Next, the medial and lateral meniscus cartilages will be examined for any signs of damage. The medial meniscus is damaged in about 50% of dogs with CCL ruptures, and the damaged meniscal cartilage will also be removed so as to not hinder the healing process or cause any additional discomfort. Your dog’s veterinarian will take care to remove only the parts of the meniscus that have been damaged as a result of the unstable femur bone pinching the meniscus during normal activity. Studies have shown that dogs with partial menisectomies have less arthritis than dogs with complete meniscus removal.

After the CCL has been removed and meniscus examined, the surgeon will begin the osteotomy. Simply translated, osteotomy means removal of bone, and in the first part of the TPLO procedure the surgeon will make a curved cut in the top of the tibia bone, to include the tibial plateau. The tibial plateau is then rotated along the curved osteotomy in order to level the slope. Hold the tibial plateau in place is a set of plates and screws, necessary to allow the bone to can heal in its new position. Dr. Slocum, the creator of the TPLO procedure, recommends a repaired tibial plateau angle of 5 degrees, but studies have shown that dogs with a slope anywhere from 2 to 14 degrees do quite well post operatively. 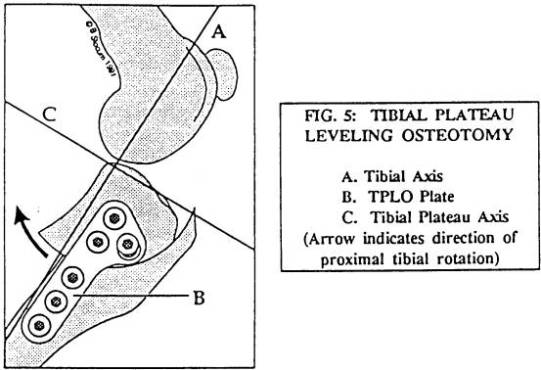 ← What Happens if a CCL Rupture is Not Repaired?
TPLO Complications →