You are here: Home › Traditional Repair for Small Dogs – Amy 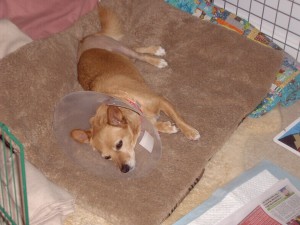 Amy is a 4 year old rescue dog, a jack russell/pomeranian cross who lives with me and “brother”, Elliott – a 9 year old Jack Russell. She appeared lame on 15th March and her vet confirmed a torn cruciate ligament on her left rear leg. There was no apparent cause, but she had been very active until that time and could have turned suddenly while running and injured the leg. She did not show any obvious pain but was not putting any weight on the injured leg.

Surgery was recommended, a real blow as I had only recently taken out pet insurance and crucuiate injury had a 6 month waiting period, so it was not covered. Orthodepic surgery was performed on 22nd March under general anaesthetic and an epidural and Amy was allowed to come home with me that same evening. 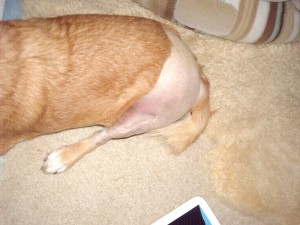 She weighs only 5.5 kilos (we live in Australia so about 12 pounds). Amy’s rump and leg were shaved but there were no bandages and the knee was stitched very cleanly. She was prescribed several types of medication, for pain, anti-inflamatories, and anti-biotics plus glucosamine tablets.

I had prepared a playpen in the kitchen to restrict her movement at home with space for bedding and water and also to keep her apart from Elliott and any possible bumps.

I think I felt almost as much pain as did Amy, feeling quite helpless and sad to see her just lying down and not her usual bouncy self. The vet had showed me how to pick her up to take her outside for toileting but it took a few days before there was any bowel movement.

Our post-op. follow up on 25th March confirmed that the wound was looking clean. There was quite a lots of purple bruising and the hock area was a little swollen, but the swelling has disappeared after 2 days.

Amy was then allowed to wander around a wider area of the house and to walk in the garden. She is holding up the injured leg and is not yet weight bearing.

I am using an Elizabethan collar to prevent Amy from licking the wound area.

On 29th March (after one week) we saw our vet and Amy was given a Cartrophen injection to reduce pain and arthritis. The injections will be a weekly treatment for the next 4 weeks. I was instructed by the vet to give massage and physio and encourage Amy to walk freely around the house and garden. 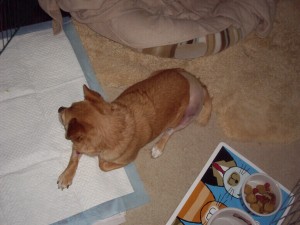 One week later and Amy appears happy and comfortable. She has a free run of the house (except the bedrooms where she might be tempted to try to jump on the bed). I have lots of cushions on all the chairs so they appear quite high and do not look appealing to her and have placed rugs so she can chose where to snooze. She can manage the step down into the garden and can wander inside and out as she wants.

This weeks goal is to continue physio and massage therapy and hope that Amy will start to put the leg down and try to walk on it a little.