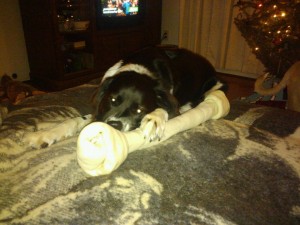 The day after Thanksgiving 2011, I took both my dogs, Samson (5 yr old Lab/Pit mix) and Dalila (2 yr old Border Collie mix), to the dog park so they could have time to run. They played hard for 2 hours, and Dalila spent most of her time running with the pack, her favorite activity. When she finally got tired, we went home. When I came to get her out of the backseat, her rear end pretty much collapsed. I figured she was just tired, or had pulled muscle. The next day, she was up and running again, so I let it go. Over the next few weeks, she would limp when she overdid it; I still thought maybe she had pulled a muscle, so she was forced to rest.

By January 2012, she was actually acting like she was in pain and favoring her left leg, so I caved and took her to the vet, who promptly confirmed she had torn her CCL. Because she’s so young, and after seeing her in that much pain, I had to figure how I was going to pay for this surgery. I wanted her to be able to run again, but I didn’t have thousands of dollars for it. 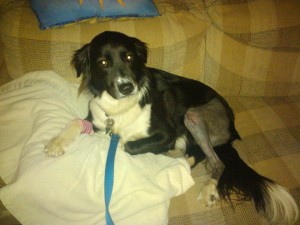 I decided to go with the extracapsular repair for price, as well as the fact that Dalila is so young and healthy. My hope is that will surgery and conservative management afterwards, she will heal better and have more solid joints later on. At least her x-ray showed beautiful hips, so if I can get the knees healed she should be a happy dog again.

After a consultation with the orthopedist in February, I learned she had since torn the OTHER knee as well! And she hurt all the time; it was obvious. Since she favored the left knee more, the plan was to repair that one first. We scheduled her first surgery for February 17, 2012. 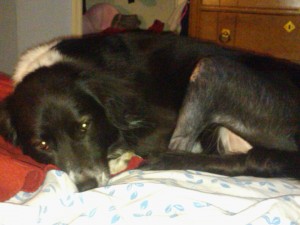 When I picked her up the day after surgery, I could tell she was glad to see me but her leg definitely hurt. It broke my heart to see her with one bald leg, crying for me to take her home. But her incision was beautiful! It wasn’t red or swollen at all, but she continued to cry as I moved her in and out of the car and set her up on her dog bed at the house. It was strange seeing my very high-energy pup not moving for a couple days.

Almost three weeks later, and she is almost acting like herself! She was toe-touching her left leg 2 days out of surgery! Within 5 days she was putting pressure on and walking almost normally. The challenge now is reining her in to heal slowly. I can tell she feels a lot better, so she keeps trying to run and jump like she wants. We are still doing only 5-10 minute walks, mostly to let her potty and sniff around. She does wear out much quicker now, but she loves laying down with the ice pack once we come back in. The ice helps a lot when that knee swells. The sutures are out, and her incision still looks fantastic. Depending on her behavior, some days I make her wear the e-collar while I’m at work.

The plan is to have the same surgery on her right knee 6 weeks after the first. I plan to rehab her as slowly as I can, so maybe she’ll be able to run a bit by Labor Day. Right now though, my only hope is that her second surgery will go as well as the first. 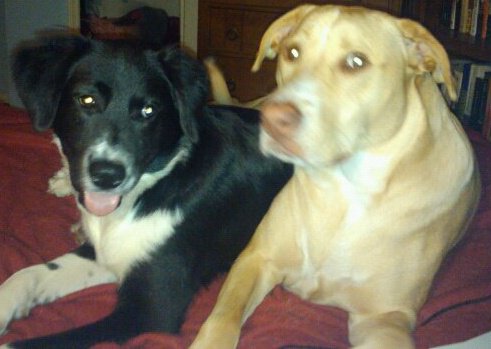