You are here: Home › TTO and MMP Surgery for Dogs – Heidi 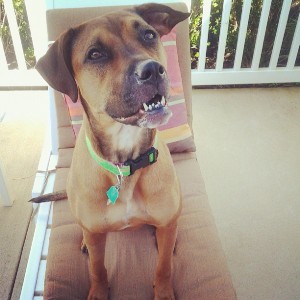 Heidi had her first CCL repair surgery (TTO) in December 2011 and her second (MMP) about 6 months later. Everything went well following both surgeries and we were problem free for about a year. Then Heidi developed a suspicious knot on her knee that worsened with exercise. It developed into an abscess and ultimately it was determined that the end of the stabilizing wire from her MMP surgery was most likely irritating the underlying tissue, causing inflammation which eventually developed into an infection. After a month long course of antibiotics, and reoccurrence of the knot, Heidi had to have her third surgery to remove the stabilizing wire and pin. These pieces of hardware were no longer needed now that the bone was healed, so she wouldn’t miss them. We were thankful it wasn’t a bone infection and hoped that surgery would be the end of Heidi’s knee troubles.

Unfortunately, a month or so later, Heidi began limping again and we finally concluded that she tore her meniscus in that same leg (we heard the tell-tale “clicking” associated with a meniscus tear). So we went in for surgery number four (3rd on her left knee) for a meniscectomy (meniscus removal). It was a simple surgery and the recovery period was about half as long as the recovery period for the TTO and the MMP surgeries. We kept Heidi confined to a small area for 4 weeks then began rehab walks to rebuild the muscle in that leg. We are now a little over 6 weeks post-op and she is doing really great. Around week 4 post-op I feel like her progress really slowed, so I gave her a week off from her rehab walks. Basically, she began limping slightly after every walk we went on, but after a week’s rest, she was a new dog. Since then, we’ve been increasing our walk time and she barely has a limp. I think as of today, she is about the same as she was before all of these complications began. 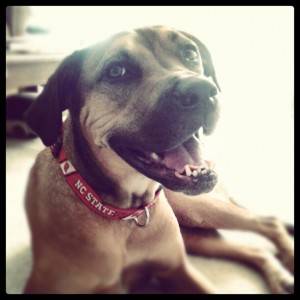 Despite the obstacles we have met along the road to recovery, I am happy with the choices we have made. I’m most glad we took the leap and did the first surgery, especially since she tore her other CCL 6 months later. I call that leg her “titanium leg” (hence the titanium implants). She hasn’t had any problems with it since surgery. Although we hit some speed bumps with her second CCL tear, I’m still glad we chose to have surgery. All surgeries come with risks, and we unfortunately had to deal with our complications, but in the long run, I think the choices we have made will drastically decrease the progression of arthritis in her later years. Heidi is 3 years old now and hopefully has many, many happy and healthy (and surgery free!) years ahead of her.

If you’d like to read a more detailed account of our adventure with Heidi, check out our blog! http://heidibsknees.blogspot.com It covers our experience from the first tear through the present!

One Response to TTO and MMP Surgery for Dogs – Heidi