Shelbie is 9 years old in February and a 50lb mix of Anatolian Shepherd and Lab so she has always been active and loves chasing her ball and Frisbee! At least she used to 🙁

About 2 years back she had her left knee buckle and was extremely lame on it, of 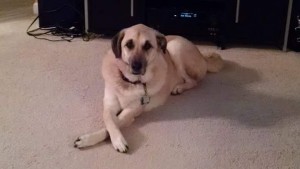 course immediately took her to the vet and find out that she has torn her cruciate ligament. In discussions with the vet, he was extremely confident in the tightrope procedure even though she is right at the weight limit for it. The confidence and price helped me make the decision, and I think it was the right one!

Took her about 6 months to get back to her normal self after the surgery and it was awesome to see her enjoying life again, as many of you know and probably have experienced, almost a year to the date of the left knee having issues she started to have the same problem on the right side.

We went to the same vet and coming off of the successful tightrope surgery on the left leg, thought it would be the right choice for the newly injured right leg. She started to improve slowly as we followed the same regimen as the last knee and was starting to finally get back to walking on her own outside and we were allowing her more freedom.

We went on a walk and when we got back she was limping a little, which is not uncommon based on exhausting the knee, but she never got any better and slowly started to go back to not using it and becoming extremely lame again. 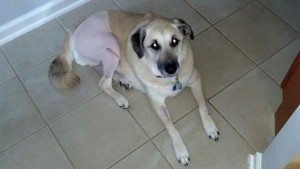 The cost is so high, even for the cheaper surgery that we aren’t able to afford the surgery again, especially the one we have to do now which is the TPLO.

Unfortunately, it’s myself and girlfriend that are trying to manage this and our time allotment and income are holding us up right now. She is still a happy dog and we spoil her every chance we get but it’s heartbreaking to see her in pain with that leg not being used, not to mention putting the added pressure on the healed knee (which luckily is extremely strong now!)

I was wondering if anyone else has had a tightrope surgery fail like this as the vet couldn’t understand it either because the left knee healed wonderfully as expected. We are saving up to do the TPLO surgery but I’m just a little hesitant based on the failed tightrope surgery, time requirement, and the cost…I feel like a horrible doggy dad…