Jake had traditional repair 7/28/10. This was Jake’s second surgery, as he had TTA (Tibial Tuberosity Advancement) in February of 2009. Prior to both surgeries we tried conservative management, but needed surgery both times.

We are currently Day 4 after the Traditional Repair, and it has been remarkably smooth. Jake is a large mini poodle (32 lbs.) and was always on the large side of his breed and is more of a small standard size. He is almost 13 y.o. so I was concerned about going into surgery, since the anesthesia seemed to escalate his aging after the first surgery, the TTA. 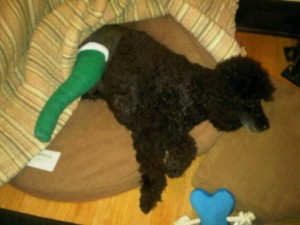 Honestly, I have read so many horror stories about the recovery period, etc., I was skeptical. Jake had surgery Wednesday, he came home Wednesday night with a soft cast, some Tramadol and Previcox.  He was a little uncomfortable that night, but slept. Day 2 was similar, and although the cast was cumbersome he was putting weight on the leg. Cast came off 2 days after surgery and he has been walking on the leg. Pain meds continue (but 1/2 tablet Tramadol 3X day) and he is doing great.

Comparing to the TTA, which I decided to do after about 6 weeks of conservative management, this was a piece of cake. Jake did, however, stay overnight with the TTA, and came home the following day, with cast and meds, and was putting weight on it (also) almost immediately, but lots of toe-touching.

I did extensive research and interviewed various surgeons prior to the first surgery, and opted for the TTA over the TPLO once I heard if there was a complication with a TPLO, it was not able to be “fixed”, but the TTA could be re-done, if needed. I believe it has to do with how the joint is re stabilized — the TTA uses a non-weight bearing bone, and the TPLO reconstructs the angle on the weight bearing leg, so if there is a problem, there is a real problem. One vet confidentially told me that sometimes the leg needs to be amputated (now, this vet preferred a TTA, but upon some checking, it may be true). IF you decide to go with a TPLO procedure, be sure to ask the vet the “what if’s” in case there is a problem a few weeks out and you need to have a “redo”. 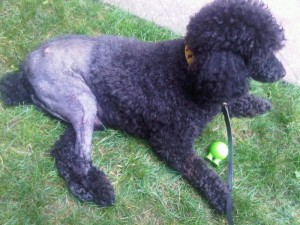 In any event, Jake is doing well, and at almost 13, he should be as good as new.

I will add that his cruciate ligament was fully ruptured on the first leg (meniscus was ok), and the partially ruptured on the second leg — although he could not put any weight on the 2nd leg, so I had no option. We believe it is a genetic predisposition in Jake’s case, as opposed to an “injury” due to his age. Also, there was no real accident, just normal dog stuff. I am happy to share any of my knowledge I have gained over the last 2 years.

By the way, the TTA cost was around $2400, plus physical therapy, x-rays etc. (another $1,000 or so); the traditional repair which I opted for this time due to the fact it would be easier on him, was around $1300. I reside in the Chicago area.