You are here: Home › Traditional Repair After Conservative Management – Tango

By Mandie on October 5, 2011 in Dog Knee Surgery, Owner Experiences, Recovery, Surgical Procedures, Traditional Repair
Tango is our 5yr old Australian Red Cattle Dog. Approximately one and a half years ago, Tango started going lame in her right hind leg. She always recovered in a day or so, and the lameness was only apparent after she had been sleeping for some time.

After a couple of months she was due for her needles. I mentioned this lameness to our vet, who diagnosed a partial knee ligament tear. She was extremely active, chasing balls for 30 mins every afternoon and a 5 km walk every morning. The vet suggested rest to see if it healed.

We decided to use a conservative method. She recovered very well. We started to increase her exercise levels after the 6 month mark, she was starting to play and run around off lead with no bad effects. We were very cautious when adding ball games, not allowing her to chase the ball, only to retrieve it after we had thrown it and it stopped bouncing. All was going according to plan and we were very happy. 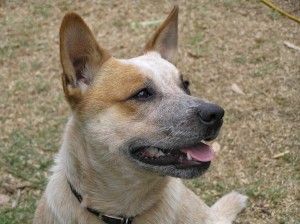 We then made the decision to allow her playfriend over, a 12yr old jack russell. They played several times with no problems, then one day she was lame again, the feeling of depair was unbelieveable. After going back to the conservative method again, she was not recovering as she had before. The limp was there nearly every time she rose after a sleep. We decided to get her operated on. She weighs 21 kgs and the vet made the decision which method was best for her and her active lifestyle.

I am so impressed with her, she has the best nature imaginable! I got the crate 3 days before and got her used to it. No problems there.

She didn’t have any arthritic changes, which i was worried about because of the time from the first lameness. The bandage fell off on day 2, but she didn’t worry the wound at all. Some allergic reaction to the stitches, but no real problems. She has been an angel, just sleeping in her crate and chewing kong toys.

I take her out on the leash for a few hours every afternoon and sit in the backyard with her. At least she can watch the world go by. She was putting weight on it within a few days.

We are now at week 5 and she walks without pain or limping. I have started to allow her a trot now and then, very little signs of limping. I have been doing the passive range of motion from day 5, and think it has helped. Her leg is quite thin, but when the weather warms up, I have ponds near me that she can swim in. Hopefully she continues to improve. We will be sure to keep her weight down, and she will only be allowed to play ball in the pond.

I hope she never needs the 2nd leg done, but at 5yrs old i know there is a good chance it will happen. Good luck to everyone out there going thru this, it is very stressful. When tango went in for the stitches removal, my vet asked how we were and not how the dog was!