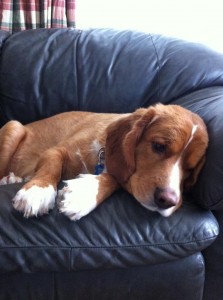 I have a rescue Basset Hound/Golden Retriever mix who is almost 4 years old. He is a very mellow, chill couch potato that does have spurts of energy and playfulness, unlike our constantly crazy Yellow Lab. About 7 months ago, they were playing in the yard and he must have somehow hurt himself because after napping for a couple hours he wouldn’t put his left rear leg down. He even moaned every once in a while in pain. We called our vet that night (not a surgeon), and he said he was pretty sure it was his CCL and that we can have him evaluated first thing in the morning. However, in the morning he was able to walk on his leg just fine and no moaning or lameness since – so I was reluctant to even take him to the vet. The vet explained the drawer test to us, and then performed it on our baby (who let out the most heartbreaking squeals of pain I have ever heard). He said he couldn’t tell if there was a drawer sign. After sedating him and taking X-Rays he said he fully tore his ACL and recommended one option – immediate $3800 TPLO surgery. And he added not to wait more than 2 weeks before severe arthritis sets in. Side note: His X-rays showed signs of hip dysplasia. Even the lady at the front desk sadly asked me if that was my poor pup squealing. Needless to say I was mortified by the whole visit.

I was a little miffed by the way our vet recommended TPLO. We wanted to do our homework, so we saw an orthopedic surgeon who said he only partially tore his ACL and he recommended TTA surgery, but suggested we first try glucosamine/MSM/chondroitin pills along with strict rest for 8 weeks. We combined that with another antioxidant with glucosamine in a powder form. We were relieved that he suggested this first, as the TTA/TPLO are scary to me. He seemed to recover beautifully, he is a mostly chill dog so he didn’t much mind strict rest! He had no obvious limp and seemed to bear weight pretty evenly for months so we started to slowly introduce some exercise about 2 months ago. At the same time, we decided to switch to cheaper glusocamine pills and he remained to be doing great. We let him off the leash, take him for long walks, and he hasn’t had any signs of pain or lameness. 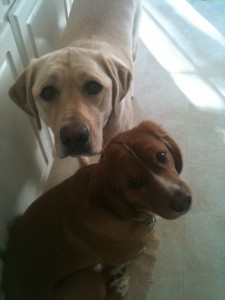 However, as of 2 weeks ago, he seems to be regressing. I took him for a walk, and wouldn’t even use his leg after a couple of hours. So we went back to strict rest and he was fine to put weight on it again the very next morning, just like at Day One over 7 months ago. Although he is using his leg, he does slightly favor his good leg and are concerned that the rest and glucosamine just isn’t enough for him, but I am praying that switching back to the other pills will do the trick.

Let me tell you, I love the hell out of my dogs, and have done more research and called more vets (holistic, surgeons, etc) than you’d ever imagine. We are trying to figure out what the next step should be. No matter what, we are going back to the other pills and they arrive tomorrow. We are also putting him on a diet dog food, he could lose a couple pounds. I have started massaging and icing his knee. I’m also doing a little physical therapy on him at home using a really helpful youtube video I found. Maybe a brace would help him?

We were so saddened by his setback that we are revisiting the possibility of surgery, as much as we don’t want him to go through that. But I am afraid of arthritis – some say NOT doing surgery causes it, some say surgery causes it. We don’t know what the best thing is for our dog and we want to do the right thing and make an educated decision. The TPLO/TTA seems so invasive, and aren’t sure if it’s worth the risk/cost. Or if since he is generally lazy the conventional surgery would be better for him. Maybe the Tightrope would be better, but I have researched and there are many failed cases of those as well as the other types of surgeries. Any advice or general direction would be greatly appreciated! Thank you in advance for your time!

We are trying to figure out what the next step should be, as surgery is something we are considering but we don’t know what the best thing is for our dog and we want to do the right thing and make an educated decision. The TPLO seems so invasive, and aren’t sure if it’s worth the cost or if since he is generally lazy the conventional surgery would be better for him. Any advice or general direction would be greatly appreciated! Thank you in advance for your time!