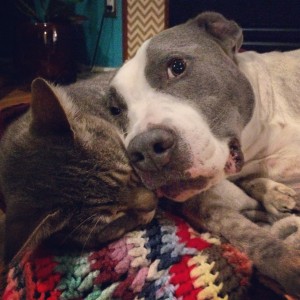 Hey there! It is with great pleasure that I share Periwinkle’s success with her “traditional” knee repair surgery. Winksy is a 6-ish year old pit bull terrier or mix.

I am sharing this story 3 years after Winksy’s surgery because I wanted to give the repair time to succeed or fail, so to speak. My lovely, lively Periwinkle was about 3 years old at the time of her repair & now at 6+ she is still living a very happy, fulfilling life with crazy-legged forest adventures & long walks.

Winks has always been one happy, wild mama living life to the fullest. Like so many of you, we were just devastated at the news of her degenerative knee issues & I was truly worried sick to my stomach over the mass of choices out there. Additionally, I am a dog trainer in the Portland, OR area so Winks is not only my sidekick in life but also in work. If you are reading this & currently making a decision about which surgery, which doctor, or whether to do a surgery at all, my empathy is strongly with you. We toiled over these decisions for months before we finally landed on the traditional repair. There is so much information out there & lots of big choices to make. We initially tried conservative management with no success. Ultimately, we went the surgery route & are very happy with the surgery & doctor we worked with. We would do it again in a heartbeat. 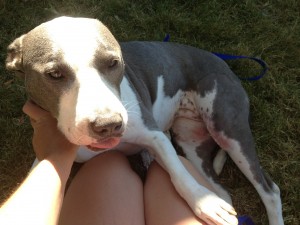 The torn ligament tissue was removed from both of Winksy’s knees & a dissolving nylon medical wire was wrapped around both knee joints to stabalize the joints. The wire, as stated, dissolved over 3-4 months post surgery when the joint had some stabilization. Both knees were repaired simultaneously so Periwinkle went through one anesthesia & one recovery process. It easily took Winksy 6 months to be at a point where she was walking very strongly again.

We did rehab at a doggie swimming pool here in Portland. We also followed the rehab guidelines from Dr. James, which you can sign up for here – https://dogkneeinjury.com/cruciate-rehab-guide-popup/ Winksy is still taking a joint supplement Glycanaid from Top Dog Health & takes fish oil.

I want to be very clear that Periwinkle has had great success with this surgery. At this point, her knee is entirely stabilized from scar tissue alone. She has NO foreign bodies in her knees. Her bone was not altered. She is all dawg! Periwinkle goes hiking with me for 1 – 1.5 hours once or twice a week & goes on daily walks for probably an hour. She is in excellent shape & living a dog’s life! 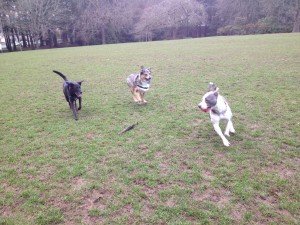 If I were able to put my 2 cents out there, I would say, “Go with your gut!” Go with what works for you & your family considering your beliefs & budget. All surgeries have a success rate. Pick the surgery you believe in & MOST importantly, pick a surgeon you believe in. We went with a surgeon we really believed in who also believed in his work. We were not comfortable with the TPLO (which is very popular in the Pac NW) because of budgetary restrictions, the supposed need to alter bone when the ligament is the issue (WTF?), the likelihood of the metal being painful during cold winter months, & the fact that if something goes wrong with the TPLO, Periwinkle might have to have a second surgery to remove metal from her bone. It just didn’t feel right to us. That being said, I know many dogs who have had successful TPLO surgeries, & some who haven’t. Both of the dogs I know who have had the ExCap surgery are successful cases.

Good luck! My heart goes out to you!