By Samantha Edwards on February 25, 2016 in CCL Injury, Owner Experiences 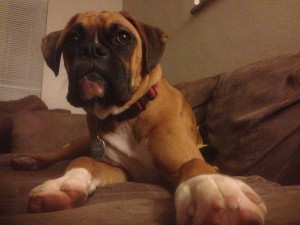 My Roxy girl is 2.5 yrs old and weighs 55 pounds. I took her to the vet 2 weeks ago because she was throwing up. She was diagnosed with Giardia and pancreatitis. She stopped throwing up immediately after being treated. A few days later I took her for a hike, our favorite activity. She came back limping on her back paw and had blood on her front paw. I took her in for emergency care as this happened at 8pm on a Friday. She needed stitches and they said she had a ruptured cranial cruciate ligament (CCL).

So in less than one week’s time, she had four different things wrong with her. She has a consultation appointment 3 weeks from now. I’m totally undecided as to how to treat her. I’m trying not to let costs get in the way of my decision. I just want whats best for her. I know I wouldn’t want to be operated on.