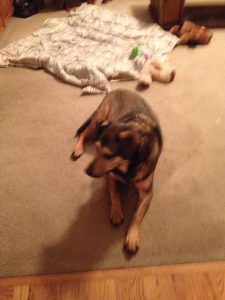 Lexi is a two-year-old Lab cross who injured her left knee playing with another dog on April 28, 2017. She was running and made a a quick turn and gave a loud cry and came up lame. I took her to the local vet the next day where they confirmed that she had torn her CCL and they recommended that she have TPLO surgery. She had her surgery on May 17th and her recovery seemed to be going very well until June 30th when she started limping again. I took her back for x-rays on July 3rd and they revealed that she had suffered a tibial crest fracture which meant she would be confined to her kennel for another four weeks.

On August 3rd she started limping again and seemed to be favoring her right leg. A visit to the vet confirmed our worst fears. She had torn the CCL ligament in her right leg. X-rays revealed that the tibial crest fracture in her left leg was still not healed so surgery on her right leg was not recommended at this time.

It is now September and Lexi is still confined to her kennel and only goes outside to go to the bathroom. She goes back to the vet next week for more x-rays and we have to decide what to do next. If she was ten years old the decision would be much easier but she is only two years old. We are wondering if anyone out there has experienced anything like this and has some advice for us.