I have a 3 year old Rottweiler, Axel. I think the problem started in June 2010, during a dog park playdate. After then he was limping on his back right leg. I took him to the vet and she said that it was a partial tear, so to keep him calm and give him pain meds. It finally got better and he was back to normal. We have regular long walks.

In May 2011, after an uneventful walk, I noticed he was limping on the same leg, and eventually not bearing any weight on it at all. I took him back to the vet and they said he had torn his acl and needed surgery. I shopped around the area for reccomendations for good surgeons. I ended up at a different vet then we usually went to. The vet strongly suggested against the TPLO surgery.

We had the Tightrope surgery done in June 2011. The day after the surgery, Axel was already putting more weight on then before. The vet said to keep to confined and to leash walk him. Axel, being the biggest Momma’s boy and cuddle bear, could not stand to be away from people. I felt like it was doing more damage then good, when he would constantly scratch at the door. So we kept him on a leash 24/7 with us.

The first two weeks of recovery went great, the vet was very satisfied with his recovery.

After 3 weeks of him seeming to be putting almost all weight back on the leg and him being fairly lazy, we let him off the leash in the house. July 4th weekend did it, he went running and jumped while fireworks were going off. After this weekend he was back to limping. The vet could feel a drawer effect in his knee again and thought he had broken the suture. He thought that it must of broke and was rubbing and causing irritation, causing the limping.

They did a second surgery the last week of July to take the suture out. They found that he didn’t break the suture, but it was rubbing on soft tissue, causing him pain. The surgeon said he had some scar tissue formed and he should be fine without the suture. Although, since the second surgery Axel has been worse then even before the orignal surgery. He barely puts any weight on it, holds it up, can barely stand up for very long without being in too much pain and sits or lays down. He just looks depressed and in pain, and it kills me to see him like this.

Personally, I am very upset with the surgeon’s decision. I dont think he should of take the suture out if it wasn’t broken. He is a 120 lb dog and if they believe he could break a 180 lb strong suture, he could just as easily break a small amount of scar tissue. I know it’s my fault as well, I should of done a better job at keeping him confined. Although I can’t help but think that just a movement of the suture would of been better then removing it completely. 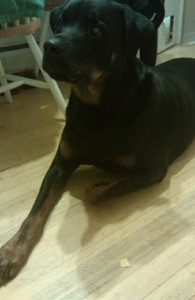 Almost $3000 spent, I only have so much more I can spend. Where I am now, is having waited over a week to hear back from my vet from trying to contact the surgeon. I have no idea what the surgeon is going to say, but I’m not sure if another surgery to put the suture back in is best. I think that the extra support will be good, although I don’t know if i can put my baby, or realistically my bank account, through another surgery.

I’m looking into getting Axel a brace, although I’ve been researching them online and cannot really find any reliable sources of whether it has worked and which kinds are best. In the beginning I asked the vet about these braces and he didn’t reccommend them. Now I definately regret not getting on for after extra support for after the surgery. If anyone has found a brace they have truely been satisfied with, or suggestions about surgery could you please help me?