You are here: Home › Bilateral Simitri Stable in Stride – Cinnamon 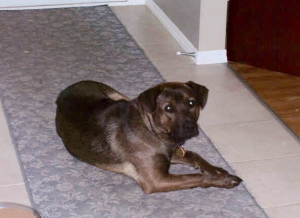 Cinnamon has always been a high energy, fly by the seat of her pants type of dog.  For as long as she has been on this planet she has loved to run.  Be it chasing the stick or ball we just threw, chasing after her brother Ireland, or running alongside my bike, her enthusiasm for being outside never failed.

Then came that fateful day when her love for the chase caught up to her.  During our morning walk Cinnamon took chase of some deer and tore the cranial cruciate ligament in her left knee, which required surgery to repair.

The surgery that was performed was not the usual ACL repair.  Instead, Cinnamon’s knee was repaired using the Simitri Stable in Stride procedure.  This procedure allowed Cinnamon to put weight on and use her leg the very next day as there were no muscle or bones cut.

Recovery from the Simitri Stable in Stride procedure takes generally four months with video check-ups completed at 4, 8, 12, and 16 weeks after surgery.  Re-check x-rays are taken at 6 months and 1 year after surgery to allow the surgeon to assess the implant’s position and condition of the affected 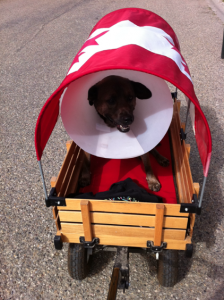 During Cinnamon’s recovery for the first few months she would come for a walk with me and her brother Ireland.  As she was not able to go for long walks while her knee healed, she travelled in her own little chuckwagon.  She was the talk of the town.

Cinnamon recovered extremely well from her surgery and she has had no further issues of lameness on her left leg.  She returned to her happy, energetic self within a few months.

Fast forward a little over one year later…during a walk in the same area, Cinnamon ruptured the cranial cruciate ligament in her right knee and the same Simitri Stable in Stride procedure was performed to repair this tear.

I now have a dog with 2 bionic knees who will NEVER make it through airport security!

One Response to Bilateral Simitri Stable in Stride – Cinnamon