You are here: Home › Simitri Stable in Stride – Boo

Boo is a 3-year-old female border collie.  Boo is/was a very active dog, as I’m sure most border collies are.  She is not a working dog, however, I do live on a farm, and as such she gets to run around at will all day long.  About 6 months ago Boo came back from one of her excursions and was favoring her right hind leg.  The next day she wasn’t showing any signs of injury, so initially I chalked up her injury to a sore paw that would get better right away.

Unfortunately, as time progressed, she was favoring her leg more often until it got to the point that she was limping on it daily, at which point I decided to take her to the vet to have her diagnosed.  As it turns out, she was diagnosed with having torn her ligaments in her knee.  The vet took x-rays of her knee and, based on them, informed me that she would need surgery to repair the joint.  It was then that he informed me of a surgery called Simitri that he had other patients receive and told me Boo would be a good candidate for the procedure.  The vet had experience with other knee repair surgeries (TPLO, etc.) but emphasized that having seen the results from the Simitri procedure really recommended to me that was the best way to go for Boo.  He explained how much less invasive the surgery was compared to the other types of surgeries available.  Based on his recommendation I decided to go ahead with the surgery. 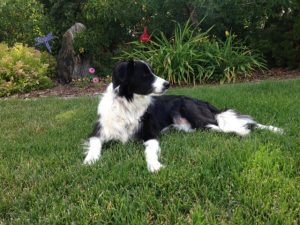 Now, here is where the story gets a little complicated.  I took Boo into the vet the morning of her surgery and he said he would phone me when the procedure was done just to let me know how things went.  Two hours after dropping her off, he phoned and told me that he and the orthopedic surgeon had decided not to do the surgery on her because they weren’t entirely convinced her knee was injured to the point where she required the surgery (I guess they manipulated her knee while she was anesthetized and decided that the joint, although clearly injured, did not have as much lateral movement as is the case with an injured knee).  The vet told me that her knee may well strengthen over time and she might be okay after all.  Great news!! Or so I thought.  I picked Boo up from the vet and took her back home that day.

Fast forward to a week later and she showed up at the door now favoring her LEFT leg.  The difference this time is that she didn’t even try to put any weight on that leg, which was never the case with her right knee.  Sooooo back to the vet we go, but this time we were told that there was no question that she had completely torn her meniscus. Long story short, she had the Simitri surgery done on June 8th on her left knee.  I picked her up on the afternoon of the 9th and the next day she was walking on the leg, albeit gingerly and not putting full weight on it.  It has been about a month and a half since her surgery and she is now walking on it with no limp at all as far as I can tell.

Unfortunately, she is now back to limping on her right knee.  I can actually hear it popping when she walks.  I took her back to the vet today and based on his examination we are now going to get the procedure done on her right knee.  I am certainly more confident that this surgery is the way to go for her seeing how well she recovered from her first surgery.  My vet has told me that Boo will recover from these surgeries and will be back to her old self in no time.  He did warn me that it would be likely that she will have some arthritis in her knees but not until she’s 11-12 years old.  He also told me that under no circumstances am I to ever throw the Frisbee for her again because she may re-injure her knee if she comes down from catching it while twisting.  She really liked playing catch with the Frisbee but I guess it’s a small price to pay to not re-injure herself.  He did say I could throw a ball for her when she’s fully recovered, but to throw it along the ground so she isn’t leaping into the air to catch it.