You are here: Home › Anatomy of the Cranial Cruciate Ligament

Anatomy of the Cranial Cruciate Ligament

The cranial cruciate ligament, or CCL, in canines is analogous to anterior cruciate ligament, or ACL, in humans. The CCL is the main supporting ligament within a dog’s knee, or stifle. This ligament bears the weight of a majority of the stifle’s load, which is why instability of the CCL results in lameness, arthritis and other degenerative changes of the knee joint and surrounding tissue. The strength of this ligament will decrease as a dog ages, with larger dogs experiencing an increased rate of degeneration versus smaller breed dogs. Obese dogs are at a higher risk for CCL rupture as obesity places additional stress on the ligament. Ruptures of the cranial cruciate are the most common orthopedic injury for dogs and the leading cause for arthritic tissue in the stifle. 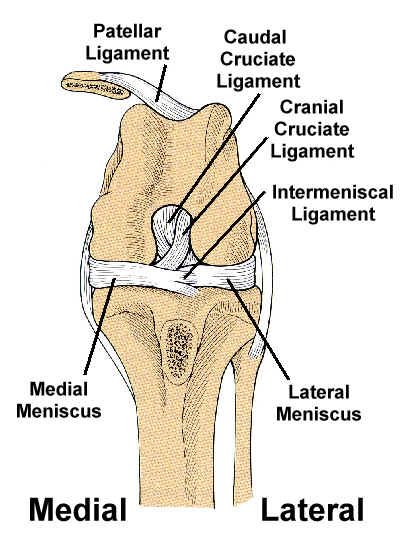 As you can see from the diagram, the cranial cruciate ligament is composed of fibers originating on the medial face of the lateral aspect of the femoral condyle, where it then inserts itself at the cranial intercondylar area of the tibia. There are two bands that make up the CCL – the craniomedial and the caudolateral. The cranial cruciate ligament receives its fresh blood supply from the synovial (joint) tissue surrounding it.

The cranial cruciate ligament’s essential function is to prevent forward movement of the tibia relative to the femur. If this forward movement is present the dog is classified as having a positive drawer test, or displaying a positive cranial drawer sign. The caudal cruciate ligament prevents backward displacement of the tibia relative to the femur, which is known as the caudal drawer. The CCL also works to limit hyperextension of the stifle and internal rotation of the tibia during flexion.

← Conservative Management in Cranial Cruciate Injuries
What Happens if a CCL Rupture is Not Repaired? →

4 Responses to Anatomy of the Cranial Cruciate Ligament