You are here: Home › Conservative Management Experience with an Active Dog – Diesel

By Mandie on January 10, 2017 in Conservative Management, Owner Experiences 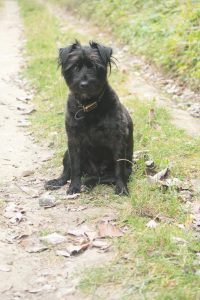 Diesel, Conservative Management, after a trip to the vet because my dog had his left hind up for three days straight (and had briefly pulled it up in the air a few times the week before) my vet, in his small consulting room, saw my dog take a few steps (leg down) and said,” Cruciate Ligament – it needs immediate surgery”. Before I had got home, he had sent an estimate of the two forms of surgery that would be suitable for my nearly 6 yr old Patterdale. He had mentioned ‘rest’ which I then researched online.

I decided to try Conservative Management as he weighs under 25 pounds, and it hadn’t been an issue for long. He was a full on, 100 miles-per-hour, a very hyper dog. It has been very hard to restrain him and keep him off his leg and rested. Walks went from 4-6 miles a day over rough ground, to 4, 5 minute walks a day (actually more like 10) and more sniffing for his mental well-being!

Preparing the Home for Conservative Management

I made a ramp for the back garden’s 3 concrete steps. At the front are also 3 steps, which he takes slowly. I carry him up and down my house stairs. He does, however, jump on and off the sofa much too quickly sometimes… I can’t stop him and he pulls a lot more than normal as he is immensely frustrated with his regime.

Listening to Your Dog

His leg went up for this first time the other day briefly, but it was my fault as I let him walk for longer (feeling so sorry for him), and the leg up has told me he simply isn’t ready, in spite of the fact he is mentally ready for a marathon.

I welcome any comments – support, criticism, advice. I feel 3 months in is still very early to determine whether this has been effective, so I will keep going in order to avoid surgery, if at all possible. He escaped out back this morning and went on a mad run, and I could not stop him for a minute or so, but I am so hoping he has got away with it… this time. SO tough, but worth it long term.