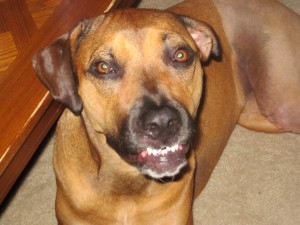 My dog Heidi has torn both of her CCLs in the past year and we opted to do surgery on both. She was just a little over a year old when she tore her first one, which had a huge impact on our decision to go the surgery route. My husband and I were newlyweds and were lucky to have been given a good bit of cash for our wedding, which has been spent entirely on her two surgeries… plus some of our savings as well. It was a tough decision, but ultimately, our end goal was for her to have the best quality of life possible.

Because the risk for crippling arthritis is great with a CCL tear, we tried to avoid that by having the surgery. Had she been 5 years of age or older, we may have chosen another route, but you just have to make the best decision for your own situation. In our case, we hope she has at least 10 good years ahead of her, and couldn’t imagine the possibility that she may suffer from debilitating arthritis fairly early in her life. According to our vet, while any joint injury puts a dog at risk for arthritis, surgery drastically decreases its occurrence.

Just a little background info, Heidi is a pound puppy, possibly boxer/pitt/? mix, but we really have no clue. She’s very athletic and weighs 70 lbs. Her troubles began while playing at a dog park. She developed a limp that would disappear with a couple days of rest, but recur with any activity. Apparently this is a signature trait of a CCL injury as we later found out when we finally took a trip to our local vet where she was diagnosed.

Heidi’s first surgery was December 16th (I believe) in Raleigh NC at the NC State University School of Veterinary Medicine. We were told they were the best of the best in our area, and got a referral from our local vet. Her first surgery was the TTO (Triple Tibial Osteotomy), which is a surgery that modifies the shape of the tibia (one of the lower leg bones) and changes the slope, or angle, of the top of that bone. (I have greater detail of the surgery in my blog, which I will give you the link to at the end of this post.) The surgery went great, and while the recovery/8 week confinement was brutal, we survived and Heidi was “normal” again!

Unfortunately, our luck only lasted until mid May. We were super careful but we still fell into that category of dogs who tear their second CCL. Our vet told us there was a 60% chance she would tear her second CC, so obviously, the odds were not in our favor. Heidi was visiting her “grandparents” and ended up chasing their cat up a tree. That night when she came home, she was limping. This time, we knew what it was and immediately made an appointment with the vet school. Our suspicions were confirmed by presence the famous “drawer movement” and we were back where we were only 6 months before. 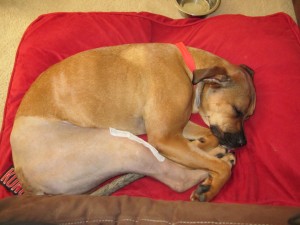 We opted for surgery again, because at a little under 2 years old, we still had the same goal for Heidi to live a long and fulfilling life. This time, our vet introduced a “newer” surgery called the MMP (Modified Maquet Procedure). I say “newer” because it is newer to the US, but has been performed for quite some time in the UK. Our vet assured us that they are VERY conservative when it comes to recommending new procedures, so the fact that they were doing this one meant it was a good one. What really drew us in was the fact that it was slightly less invasive and slightly less expensive because it didn’t take quite as long as the TTO. Instead of making 3 cuts in the bone, they only made 1. The end result was still the same- changing the slope of the tibia (again more details in the blog) I’m all for doing the least invasive procedures, so after doing a little research we decided to go for it.

Again, this surgery was flawless and she was touching the operative leg to the floor with a little weight immediately after surgery (the same as with the first surgery). Now we are almost 7 weeks post op- almost the end of our restricted activity period- and she’s looking great! She barely limps… has more of a bounce in her step, and doesn’t seem to be in pain at all. I’m happy with our decision to do surgery and hope that she will eventually be able to resume normal activities!

The one thing I did not mention in our blog was the price of the surgeries, mainly because I don’t like our friends and relatives to know our financial business, but I feel like it’s a question a lot of people have (and I had) so I will share it with you. Again, this was in Raleigh, NC, so it could definitely be different depending on where you reside, but we paid roughly $3000 per knee. I think it was more like $3200 for the first and maybe $2900 for the 2nd, but the range they gave us for each was $2800-$3400. It is never a set price because there may be complications, some surgeries may take longer, and the larger the dog, the more anesthesia they need!

As I mentioned earlier, I kept a blog of our experience, hoping it might help someone else in our situation to make a decision on treatment or know kind of what to expect if they chose surgery. Every dog is different and we got really lucky that we did not have any complications, but when I was researching this injury in the beginning, the best info came from blogs I found (which were few and far between). If you’re interested in reading more details about Heidi’s experience, check out our blog! http://heidibsknees.blogspot.com/

I hope Heidi’s story will help you and your pup!