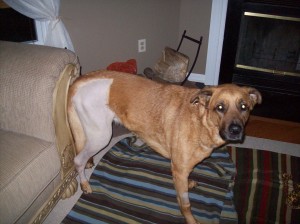 Timber is a 6 year old female shepard mix; she is my baby. In August 2006, Timber tore her left ACL and she underwent TPLO. She recovered beautifully from TPLO surgery. Nearly 4 years later, she developed an abscess over her TPLO scar. I took Tim to my local vet, and she said that it looks like it could have been a suture from her surgery that did not dissolve. In for surgery to remove the abscess she went.

After two weeks the abscess started to grow back, so I took her to the surgeons office (who did the surgery 4 years ago), to find out that the stainless steel plate she had, had become infected. He recommended to remove the plate left in after the TPLO surgery. On Feb 7, 2010, Timber went in for plate removal, and on that same day she was also diagnosed with a torn ACL in her right knee. I was told I needed to wait 1 month until she had her right knee operated on because she had 2 types of bacteria growing on the plate in her left leg; she needed a course of antibiotics.

So we waited, and mommy did her research. After plenty of reading I chose the TTA (Tibial Tuberosity Advancement) surgery, which uses a titanium plate. I felt that she was at a greater risk of rejecting the stainless steel plate with the TPLO surgery. I did my research on the two type of metals, and titanium seems to be the better of the two, so we went with TTA.