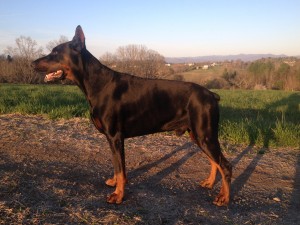 Panzer completely ruptured his ACL in his left leg in Sept 2014. Panzer is a 5-year-old Doberman who weighs around 105 lbs. He’s lean and loves to run the fence line and turn on a dime…thus the ACL tear.

His surgery was a success! He gained back all of the muscle in his left leg and was doing great….then the unthinkable happened. One year later, Panzer tore his lateral meniscus on the same leg he had his TPLO on. I let him outside to pee one morning and he came back in the door “toe-touching” with his left leg. During an arthroscopic procedure, the surgeon determined that Panzer had a severely shredded lateral meniscus that needed to be cut out. The surgeon told me that this is a very rare tear and the probability of Panzer returning to 100% was up in the air.

It is now 4 months post surgery. Panzer is still toe-touching and not utilizing his leg even 15% of the time. He will try to use it while he is walking or jogging but not when standing. He is on Tramadol, Gabapentin, Rimadyl, and Adequan. I am also doing laser therapy and acupuncture. I have seen multiple docs about this issue and they all say “it is what it is”….basically he has to live with the extreme arthritis that is now built up in his left knee. I can’t seem to find anyone who has had any experience with this type of injury and the recovery prognosis. Any feedback from individuals that have  had similar problems with their dogs in this regard would be greatly welcomed.