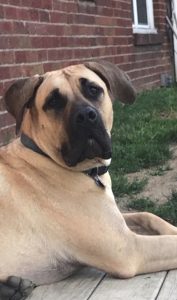 Mateo tore his CCL, right leg, last March 2019. While he was favoring that leg he tore his left leg. The doctor wanted to schedule surgery. I was concerned about his growth plates not being closed. He agreed, and we waited. I was surprised that this was not brought up by him.

While we were waiting for his growth plates to close, he actually got better. When I say better I mean, he was running and playing normally. This does not mean the tear healed. I was told this would not heal on its own.

Now Mateo is 2. He is 130 pound Presa Canario. During some rough play with my other Presa (she is 1) he injured it again, and is now limping. We scheduled the surgery for October 14th. He is having his left leg TPLO surgery. He will probably have to have the other leg done as well.

I wanted to share my story as it goes, because I am so afraid that I feel if anyone else goes through this then at least you can read this.

I will try to be as detailed as possible with my updates.

Mateo is a very sensitive dog. He really has never had to even be trained. Not sure how I managed to be lucky enough to have an angel. He doesn’t pull when walked, doesn’t run away when off leash, I never have to say no to him. I am concerned about his mental health (being sensitive) as well as his physical health (because he is so big).

Ok well I will update you as we go!