I adopted Mousse, a pure bred chocolate lab, a little over 2 years ago – she was 15 months old. In the words of my vet, Mousse is exuberant. She was always ready to run, fetch, swim etc. etc.

Then, about 6 months ago, she started having problems with her back right leg. I took her to my vet several times and was told each time, she was okay. I had the vet take X-rays of her hips and her right knee. They looked OK and he said she might have strained a muscle and I was to give her Rimadyl and Tramadol. I did and it was slightly better and then … worse: she was having trouble going up the stairs and getting in and out of the car. 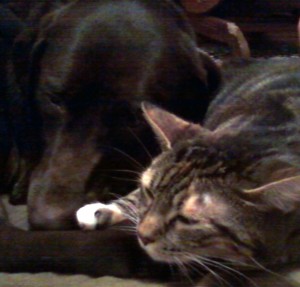 We went to Oradell Animal Hospital with the X-rays and the orthopedic specialist there said she had torn the CCL’s in both back legs. The good news was that it was repairable and he proceeded to show me how the TTA would work and then said it would cost $4300 … each leg!! I’m sure he saw my jaw drop to the floor, and he was decent enough to suggest that if I could go outside the NY Metro area, I might find it less costly.

I started talking to people and got numerous recommendations for veterinarians, animal hospitals, veterinary schools. I read whatever I could on the internet and became more knowledgeable about TPLO, TTA, extracapsular – traditional and Tightrope.

TPLO and TTA were scary to me on two fronts – the actual surgery where they cut the bone and then plate/screw it into a different angle, and the recovery period during which the patient cannot be active or the repaired bone could be damaged (lots of horror stories about permanent damage, lameness, even amputations!)

Knowing my Mousse, traditional suture was not a good option – she’s too active and too big … even at a svelte 67 lbs. So I started to ask about Tightrope. Although they don’t do it there, the vet at Blairstown (great place) thought Tightrope might be a good choice. Mousse and I went to Univ of Penn Vet. – very good session but they don’t do many Tightropes and they were recommending TPLO. I had also contacted Cornell Vet College, but they don’t do Tightrope.

I then emailed Dr. Cook at Univ Missouri (who came up with Tighrope) and he was kind enough to send back information and a list of facilities in NJ and NY. I researched the list via the internet and made an appt. with Dr. Henrich of Tranquility Vet Clinic (western NJ). About halfway into the appt., I felt we were in the right place and scheduled the surgery. Oh what a relief to finally be able to make the decision!

We drove (it’s about an hour west of us) back to the clinic on Monday 11-8-11 and they put a pain med (Fentanyl) patch on the back of her neck. The surgery was the next morning; I dropped her off. Dr. Henrich called me around 12 to let me know the surgery went well and I could pick her up late afternoon/ early evening. I drove back to get her around 6pm – my poor Mousse was still groggy, her entire back left end was shaved and she was wearing a giant E-collar – she looked miserable! 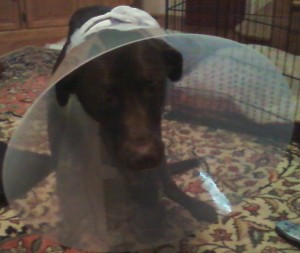 The incision is about 6 inches long, held together by 15 staples. (I count them regularly : )

The first few days were fraught with anxious moments but I muddled through. I have her harness on almost all the time to control her forward momentum and a beach towel knotted around her waist makes a good handle so I can keep her from putting full weight on her back legs. We only go outside to pee/poop and she sits in the sun while I rake leaves.

Sat. 11-12-11 we went back to have the patch removed and to get another laser treatment (it helps to reduce swelling and promote healing). The Dr. was pleased with how the knee looked and that Mousse is able to put it down (not putting weight on it though).

She is more active than she should be and they had given me some tranquilizers to keep her calmer which definitely help. She does not like the crate or the E-collar, but I have no choice if I have to leave the house. I still get kisses on my chin so I take that as a good sign.

Sat the 19th she is scheduled to have the staples removed … one less thing to worry about.

Mousse is putting more weight on the repaired (left) leg and would love to go for a real walk. She seems more comfortable with the reduced-size cone but is getting more obstinate about going in the crate when I have to leave for work.(I didn’t crate her before the surgery.) Hopefully I can pack up the crate again after the staples come out this Sat. The knee and suture line look very good to my unprofessional eye so I’m feeling positive about the future.

Just back from staple-removal. The vet is very pleased with Mousse’s progress and we now have some physical therapy exercises.

Unfortunately, the cone is still required as there are still two small openings in her suture line. These are expected to close in the next few days … as long as she doesn’t lick and irritate them. I can also extend her walks a bit. So small steps forward … but it’s all good : )

We met with Dr. Henrich, the vet who did the Tightrope surgery and he was very pleased with Mousse’s progress. She’s walking so well that there’s even a chance he may not have to operate on the right knee.

We reviewed the exercises for physical therapy which I do at home and he gave us the okay for moderate walks. We go back on 12-15.

I’m very happy to report that we had 2 more follow-up visits with the vet and during the Dec. 29th appointment, Mousse was given clearance for normal activity.

The surgery is completely healed and her left leg is now the stronger of her 2 back legs. Her right leg showed and still shows very little sign of her original difficulties. The vet said it has happened before where he had a dog with bi-lateral CCL injuries – he operated on one leg and the other leg seemed fine on its own. We (the vet and I) decided not to put Mousse through a second surgery unless that right leg starts giving her problems.

Obviously, I’m hoping for the best but am prepared for what will probably be another surgery. At least this time, I know exactly who I will take her back to. I have only good things to say about the entire staff at Tranquility Veterinary Clinic.

Mousse was doing very well after the surgery and had been cleared for activity. Unfortunately, she recently started to limp again, lifting the back left leg, which had the surgery.

Another visit to the vet and it seems she may now have torn her cartilage – which is on the list of possibilities following canine knee surgery. We are scheduled for another surgery April 26th to clean out the damaged cartilage. I’m told that this won’t be as extensive and, as such, her recovery time will be shorter. I’ll keep you posted.

13 thoughts on “My Decision to Pursue Tightrope Surgery – Mousse”