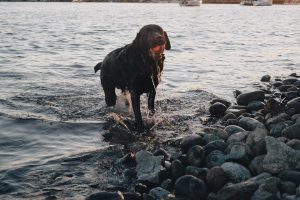 After stumbling upon this website about a year ago, I thought it’d be good to share my own experiences with my dog and conservative management.

Taking it back a bit, it all started in February 2016. I have a pretty active 8 year old (7 yo at the time) 85 lb chocolate labrador named Finn. He spent most of his life chasing balls and frisbees, as most labs do. Lately I had noticed that after some rigorous activity like a game of fetch, he would often be stiff when rising, limp slightly for a day then be back to normal the following morning. I didn’t think much of it as he never yelped in pain or held a limp longer than 24hr.

I thought that maybe with his age, he’s beginning to get a bit stiff and I decided to pay a visit to my local hydro therapist to help sooth his aches and teach him how to swim. (Long story short, we grew up in an area with no bodies of water, so he never swam!)

I took him in for a consult and is where this all started. The therapist immediately pointed out that he most likely has a partly torn cruciate in his hind right, which was later confirmed by the vet using the drawer test method. Along with the drawer test he also showed other signs such as not fully weight bearing on the affected leg, had some muscle atrophy in his hamstring, and would limp after heavy activity.

I went home feeling sad and extremely guilty that I didn’t notice this sooner, and was unsure of what to do. The therapist seemed hopeful and confident that conservative management would serve him well and that with his very slight limping, it could possibly be a very slight tear instead of a full tear.

I began strict activity restriction for 6-8 weeks. Few short potty breaks throughout the day, and luckily he is just a couch potato at home, so I didn’t have to worry about him being too wound up. We did lots of brain games, so he was at least mentally tired. Paired with the activity restriction, we also did hydro therapy once a week for 4 months. I also worked to get his weight down a bit and adjusted his diet to include a good amount of joint supplements and anti-inflammatories.

It showed some improvement, he no longer limped but he still wasn’t fully weight bearing on his hind right. I was stumped. I went back to the vet for another consult, and he suggested I try cold laser therapy. This is where things began improving a lot.

We started right away, doing 2 sessions a week on both knees and hips. After a couple sessions he was no longer stiff getting up and even the hydro therapist noticed an improvement on how he distributed his weight; it was even across all 4 legs! I was so happy.

It’s been almost a year now from when we began CM, and he’s doing better than ever. We can’t wait for summer to arrive so that we can swim a lot more outdoors, we enjoy longer walks now and hikes on occasion. No limping at all! I believe conservative management was very successful for us, him being a large breed dog I was skeptical but I think we did well considering it was only a partial tear and not a full tear. If it had been a full tear, I think maybe we would have considered doing TPLO.

We don’t do any off leash stuff still, as I still want to keep his activity somewhat under control. We still are continuing doing cold laser and hydro, but only a couple times a month compared to every week when we first started.

I hope this experience can help someone out there who might be dealing with a similar situation!