You are here: Home › TPLO for Border Collies – Jackson

My husband and I have two dogs, and they love to play in the backyard. In October of 2013, the boys were in the backyard when Jackson, mid running at top speed, fell to the ground and cried out. LOUDLY. After finally getting up, his left leg remained up in the air and he refused to put any weight on it. Right away we knew something was wrong. 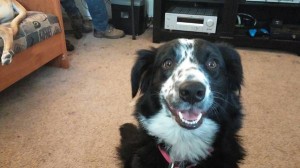 After an exam by our regular vet, we were referred to an orthopedic surgeon. After examining our baby, the surgeon reluctantly told us that Jackson had indeed torn his ACL. (No x-rays or MRI; she examined him thoroughly and we trusted her expertise.) After the initial heartbreak and shock, we knew we wanted him to be able to run again with his ‘brother’. So, on Nov. 1st, Jackson underwent TPLO surgery on his left knee.

To describe the anxiety during the surgery is impossible. We were nervous and anxious to hear that it went well. After a few hours, we got the call that everything went well and we could pick him up the next day.

To be honest, the staff was truly amazing and they did their best to prepare us for the VERY LONG recovery which was in our future. We were not, however, emotionally prepared to go through it. Jackson did very well through the surgery, and came home all drugged up and didn’t move for the first day or two. After a few days he began to get restless, as he is a pretty active dog. It was hard; we had to crate him when not home; he was stuck with an E-collar for almost 8 weeks which drove him insane (we had to give him Xanax a few times because he started to become depressed). He was restricted to a space in our living room no bigger than 8’x8′. We leash walked him 3-4 times a day, with the help of a sling under his belly for support. It was, in so many words, a nightmare. But we survived, and so did Jackson. He began to recover very nicely, and eventually started putting his weight back on the leg during our walks. It hasn’t helped that we got about 900 million feet of snow this winter, so our walks were severely reduced.

It’s been just about 4 months, and we were given the all-clear from the surgeon to resume his normal activity this week! And then…the real nightmare happened.
Just yesterday, Jackson was outside, and it appears he has now torn his RIGHT ACL, as he couldn’t get up from a sitting position in the backyard. After carrying him inside, my husband and I noticed the same actions he took with his left leg was now happening with the right! How can this be happening, already!? We were warned that most dogs who tear an ACL in one leg have a 50% chance of tearing the other, but we were not prepared for it to happen so soon!

And due to his left leg not being 100% strong, he’s having great difficulty getting up from a laying/sitting position. It’s breaking our hearts, and we cannot go through with the TPLO surgery again (emotionally and financially).

I’ve begun doing research on stifle braces, and am hopeful that our surgical apt on Monday with the surgeon will be beneficial in lending us to alternative methods for recovery.