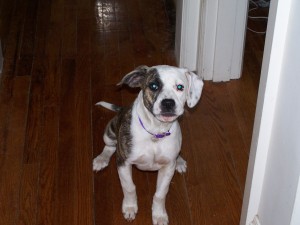 In May of 2013, Dandelion started limping and showing signs of discomfort. I knew instantly what it was since I had another dog (Duffus) to do the same thing back in 2002. Duffus had the ACL surgery which is what they call Traditional surgery now. I didn’t want Dande to have surgery because I am terrified of an animal being put under for anything (yes…I worry).

I heard from a friend at work that her dog had hurt his knee and did Hydro therapy for a few weeks and never needed surgery. Yipeeeee I thought so I signed Dande up for a Hydro therapy consultation with the therapist. The therapist (Cassie) said she thought Dande was a good candidate for the therapy, but couldn’t make any promises that she wouldn’t need surgery eventually. Although the Hydro therapy would help strengthen her muscles and would help with recovery if she did need the surgery. So I signed her up.

10 sessions of walking on a treadmill with water up to her chest. No problem right??? Except Dandelion hates water!!! She did really good considering and graduated. Her Therapist was the best and really took time with Dande to help ease any pain or discomfort. We love her! Less then 2 months later Dande chased a diesel truck (she hates them) along side my chain link fence and the damage was done. 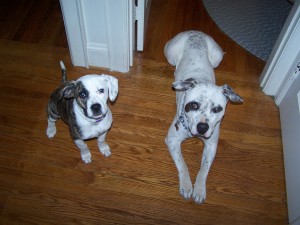 We headed in for another visit and saw the Surgeon this time. He said both knees were blown and thought maybe she was born with bad knees due to her parents past and breeding (which I had no clue since she found me at 5 months old and has been with me ever since). The Surgeon recommended the TPLO on the worse knee (left) first and she had surgery on April 24th 2013.

Surgery went great and she came home the next day. She was so pitiful and didn’t want to even try to put that foot on the ground. She was lifted up and down steps and a sling was used to help her out to potty. This was rough since she weighed 65 pounds. She wasn’t allowed to walk on slick floors and since I have all hardwood I ended up carrying her a lot more then normal, but I was willing to do whatever to help her feel better and walk again.

It took 12-14 wks for her to recover fully and this included another round of hated Hydro therapy. She isn’t very active and was doing so good, so the Surgeon opted to wait on the right knee. All was well until 2 wks ago and she somehow twisted the right knee the right/wrong way and here we are again with a bum knee. 🙁 She goes Monday to see her Surgeon (who is awesome! I would recommend him to anybody!!!!)

I am debating on doing the TPLO surgery again or just doing the Traditional surgery (ACL aka the fishing line). I guess we will see Monday what Dr. James recommends. Dandelion is almost 8 now and like I said is NOT very active. She prefers to sleep…walk….eat…and sleep again. She is NOT a go getter to speak. Never has been really and the Surgeon thinks it may have been due to her bad knees all her life. The TPLO surgery did great but was very invasive. The ACL/Traditional recover time is less. Tough decision …..my dogs are my kids so I want the best for them. Hopefully I will be able to update everyone after Monday on what is decided.

I promised an update after Dandelion’s trip to see Dr. James at The R.I.V.E.R on Monday Nov. 18th so here goes. As soon as Dr. James examined Dande he told us she needed surgery. Considering we already assumed this…it wasn’t a surprise. Dr. James recommended the TPLO surgery again. I hated to but decided to go with it because the ACL surgery usually tears again in most cases and I wanted Dandelion out of pain and able to be a dog again.

Although she loves being lazy…she hates being cooped up all the time and that’s pretty much what was happening since she twisted her right knee. They did surgery that day and Dandelion was home the next evening. It was amazing how well she did. At first she was hesitant to use the right leg but with a little coaxing and some nagging from me she started using it more often until finally she was using it constantly by the 2 wk. mark.

She is going for her last Hydro therapy on Sunday and gets her 8wk x-rays the following wk. I can not tell you enough how great she is doing and how awesome her Dr. his staff and her therapist are!! The people at The R.I.V.E.R are awesome and amazing. You can see their love for the animals and their jobs in their eyes!

Dandelion has graduated from her water therapy and her 8 wk x-rays looked great (she had them 4 wks ago and her Dr said she was at 90%). Dandelion is doing great! I can tell she is feeling like a new girl, and I feel that Dr. James was correct when he said he thought she had been in pain all those years with both knees being bad. She doesn’t lay around as much and actually instigates rough housing with her younger brother, Xander Bayne (who she hated after he was 4 months old and bigger then her already).

I am so glad we went thru with the surgeries and trusted her wonderful vet and therapist. We are so thankful for them! They are awesome! I am hoping to update her pictures on here soon also.

Dandelion’s new nickname is the bionic dog. I love her more then anyone can imagine and I am so glad she feels fantastic now. I recommend the TPLO surgery if it fits your needs.