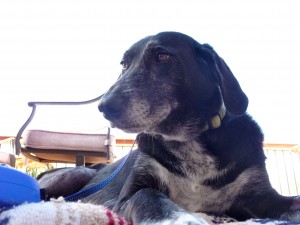 Neva is a 5-year old pointer mix. She lives to run, jump and play. During weekend runs at our open space dog park she puts in 10+ miles chasing rabbits to my measly four. She’s never had a health problem since the day I picked her up from the pound, at 8 weeks old and under 12 lbs. Slender by nature, she hit adulthood at 45 lbs and over the last couple years she’s crept up to 68 lbs – still svelte, but not skinny by any means.

In Aug 2010 we were playing ball in the yard and she hit a divet in the grass and twisted her knee. I knew something was wrong right away. She stopped, I ran to her and got her to lay down. She would not put any pressure on the foot and was clearly in pain. She hobbled on one leg, keeping the other high and managed to get inside to rest.

Some quick “Googling” and I found this site and many others – symptoms told me – I knew she’d torn her CCL before we even went to the vet a couple days later. Sure enough, the doc confirmed my suspicion and a week later solidified it with x-rays. (We waited a week before spending xray money to see if she would put more weight on it – perhaps it was just a strain.) 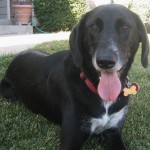 An important aside for anyone considering xrays – have them do the full pelvic as you will only then get to see what else may be at play. In Neva’s case, the news was not good. While only 5, she is showing signs of significant hip degeneration on the right (where the knee blew). The left hip and knee also showed some wear, and the doc said the chance for the left knee to blow was at 80% – which is a bit higher than the quoted 40- 50% for dogs in general.

The hardest part was knowing what to do because it was all starting to seem like a slippery financial slope. My husband and I argued about it for days. We love our dog but at what financial burden do we say “too much” and what are our choices if we do nothing and just let her heal? Nobody could give us a clear answer. User experiences like the ones on this site provided the most insight.

As far as prices, we priced everything. The prices I listed below were those provided by my vet and they save money by being a location where they don’t employ a full time orthopedic surgeon share a traveling ortho with 20 or so other vets in the area. This cuts costs and allows them to still offer specialist care w/o paying for fancy overhead – I think it saved us 1/3rd the cost of going to a hospital directly.

Here is what we ended up considering:

For the hips:
• Hip replacement – torture on a dog and HUGE expense. ($5k/ hip).
• Hip stem cell therapy – supposedly 85% success rate – they simply take some stem cells from the dog’s chest area and place them in the hips and the hips improve magically. This has been used by horses for quite a while but is new to dogs $2250.
• Manage hips with drugs – an 8 week regimen of Adequan shots for dog (you can do it yourself – they don’t even notice) plus daily Glocosomine tabs in food. Then continue the Adequan every month or so. Note on drugs – save over half the costs by buying them online – 800-petmeds.com or I found www.drsfostersmith.com to have good prices. $500+ annually.

We chose: Manage hips with drugs.

Nobody could tell us how bad the hips were and if they had always been this way. She did not appear to be hampered by it and we just weren’t ready to drop a bunch of dough on something we weren’t sure was going to really be a problem any more than any other dog we see at the dog park.

For the knees:
• TPLO on right knee – the defacto standard and Cadillac of knee surgeries for dogs. Most vets love this – it works and it’s the #1 financially profitable dog surgery for vets in the nation! $2500 – $3500
• TTA – also high price ,but seemed to hear it was a longer recovery. Not sure I really considered this one.
• Tightrope Surgery on right leg – different approach, newer, less invasive, doc said she’d only had one fail in the time she’s seen it, less expensive at $1500 – $1900
• OrthoPet Brace – on right knee and/or left knee to avoid surgery and let it heal naturally. $850 for one brace including all consults.
• Conservative Management – I tried this for three weeks and she was not really improving.

We chose: Tightrope for blown knee and OrthoPet brace for the left knee for prevention of further tear during healing and long term.

Why did we choose the Tightrope repair surgery?

TPLO seemed like giving a less than perfect dog a single bionic leg – and still suffering from the other bad leg. Giving the dog surgery on the other knee later is something we don’t want to do. So we opted to fix the bad knee now and hopefully pay now to mitigate the high chance of another knee injury later with a future brace. This kept it in the $3k range and gave her the best chance for high quality of life in our opinion. We could have just braced the right leg and hoped it healed, but we did not know if meniscus was damaged and if it was the brace would not help as the dog would not put weight on it. As it turned out the meniscus was fine but we didn’t know until we got inside for surgery. (BTW a meniscus-ectomy – or something like that – is $1500 alone – might as well do the tightrope!) 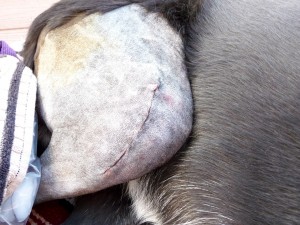 Its been 4 days since surgery (Sept 8, 2010). I read a lot of horror stories on here and other places about recovery. But we’ve had none of that. She came home that night, drugged up as a sailor on leave, but she was fine. We have Tapazol for the pain (the patch was overkill), as well as the Duramaxx she’s been on since the injury. She peed and pooped the next morning and continues to eat normally. She is already toe touching when I take her out to go. The brace will be ready next week so I’ll keep you posted on that! 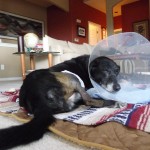 The biggest problem is that dang cone to prevent licking. It makes her nervous and unable to relax. I know how important it is for her not to touch the stitches (which BTW are inside and will dissolve with time) and how fast she can unravel the work. But the cone has caused me to lose sleep. I tried putting shorts on her – she took them off. I’m considering some kids biking shorts next. The vet says none of this works. She is not actively going after it, but I’m worried the real itchiness hasn’t yet hit and will soon. I crate her when I’m gone but put her on the floor next to me while I’m home.

I’ll give an update on how the tightrope is working later, but so far, so good!

First, thanks for the note on collars I will DEFINITELY try one next time we have an issue! Luckily we passed that phase w/o incident. That was, however, the worst part!

Its been 4 weeks since surgery. Neva is very active now and the hardest thing is keeping her mellow. I work at home some days and put her in our bedroom when gone. We are walking the block for 15 minutes daily and she is putting plenty of weight on the leg. Vet says she is in 95th percentile which makes me a proud mama but really it was nothing i did – just good luck i think.

I try to massage her leg and she tolerates ice / heat which is recommended by the doc. The OrthoPet brace as helped her to get her gate in order for the “not so bad” leg but we only wear it when out and about. Day 1 of the brace i could tell her using it made her work both legs more which was good.

Right now I am so happy we did the surgery, and feel good about the Tightrope option. It was a quick recovery for her and no real heart wrenching pain.

Thanks for everyone’s story here and i will keep reading.