You are here: Home › Conservative Management for a Torn Meniscus, Deuce 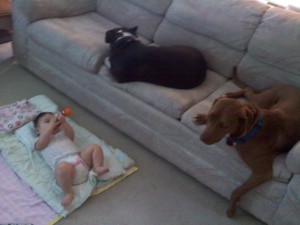 In September 2010 our dog, Deuce, blew out his knee. We went to the vet and he’s been diagnosed with a torn meniscus. We are going to try the CM method of healing in hopes the scar tissue fills in the spot where it’s torn. Our family can not presently consider surgery because of the expense and having a new baby. I’m helping with babysitting (I’m the grandma) expenses now. 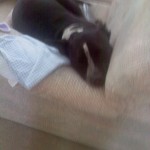 Our present dilemma is getting him in and out of the house to go potty. He’s 70+ pounds and I can not lift him up – not only is he heavy, I have bad knees. I’ve asked Ashleys’ Angels for help with a doggie wheelchair to at least get him in and out of the house. We’re also considering putting in a ramp to get him down the stairs. I’ll keep you all posted as he progresses, and any suggestions would be greatly appreciated as well!

15 Responses to Conservative Management for a Torn Meniscus, Deuce