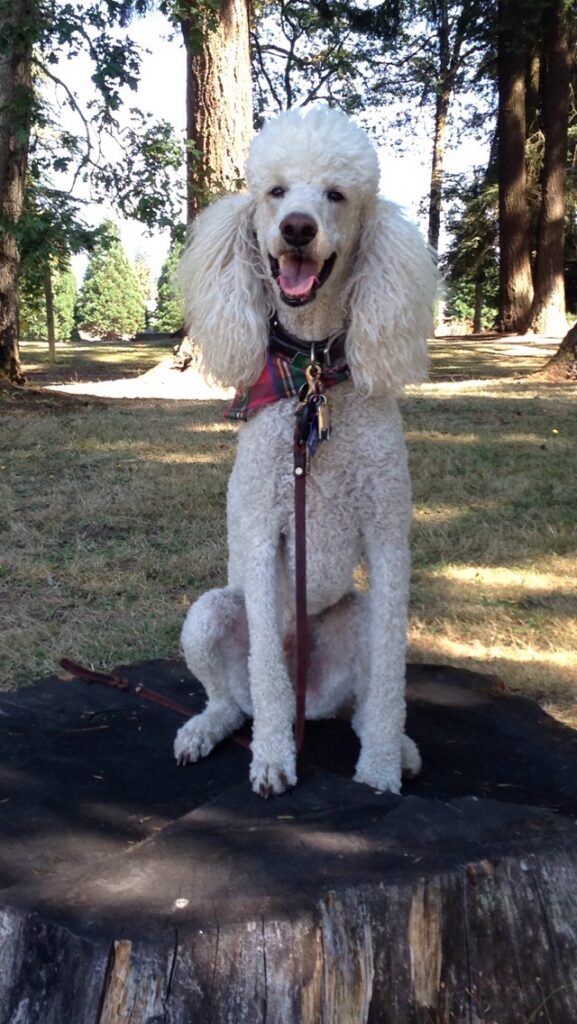 Sampson is a 9y 8m Standard Poodle. In January or February, we noticed him with a limp and discomfort to the left rear leg.

We scheduled him an appointment with his vet. In the appointment, he didn’t give much information to the doctor. She suggested X-Rays under anesthesia. He needed a dental cleaning so we decided to kill two birds with one stone and get both done at the same time. They were not able to get a positive anterior drawer test but were able to get some X-Rays to send off to the Orthopedist for confirmation.

It was confirmed that he in fact did have a ruptured CCL after reviewing of X-Rays and a physical exam from the Ortho. We were given two options for surgery and with research decided on the TPLO as he is bigger and usually has fast and explosive movements. The diagnosis came in February. We waited patiently for the TPLO estimate to be emailed to us. Finally, it came and we decided to go ahead and schedule the surgery.

Sadly… Timing is EVERYTHING! Unfortunately, COVID hit and all elective surgeries were put on hold. I still do not understand why this procedure is considered elective..

Finally, we got a date! 7/8/2020! We did all the prep-work! Got him a harness for his hind end, a donut collar, set-up “Camp Sampson.” We were READY!
Surgery day came. The surgery went well! The ortho said that he had seen much worse and he did great in the procedure! We were able to pick him up the same day!

Picked him up, brought him home, got him comfortable. Night one was pretty uneventful.. My husband took the next day off to be there with him the day after to make sure all was okay. Friday, Saturday, and Sunday all passed. He was toe-touching and progressing well! Sunday night we removed his Fentanyl patch and the dressing over the staples as directed by the surgeon. Everything looked good!

Monday comes, we lock him up in Camp Sampson, which basically was a play-pen type fenced area big enough to fit his bed and a bowl of water. This was the first mistake. No top on the enclosure. When I got home from work on Monday the 13th of July, I noticed some drainage on the blanket and then I saw.. It…

His incision was completely open! I could see his bone, the plates.. Everything. He still had his donut on but we also had a very guilty looking other dog, Biff.. our little dog is very caring! We often call him “the dentist” because he is always licking inside the mouth and ears of Sampson.
I immediately call my husband in a panic telling him that we need to get him back to the clinic ASAP. He was able to leave work and made it home in record time. Meanwhile, I wrapped the wound to the best of my ability with some sterile non-stick cause and paper tape..

He called our vet on the way home and they told us to bring him in.
We got there at about 3pm.

They came out and got him, we are unable to go inside because… COVID.. About 10 minutes later they call and tell us there is nothing they can do for this magnitude of a wound and we need to get him to the emergency clinic.
The emergency clinic is only about 15 minutes away so we headed straight there.

They came out, got him, came back out about 20 minutes later and said, “the doctor says that the entire surgery is ruined. The liability is too high so he will not touch him. You need to take him farther north.” So off we go! Headed to per emergency in Tacoma.. At this time its probably about 4:15 or so and we need to get through rush-hour traffic through JBLM. But, anything for him!

We get to the emergency clinic and they have a sign outside saying it is a 5-7 hour wait. They came out and get him at 5 pm. There was nothing to do but hurry up and wait. At 8 pm they called us and stated that there were still a couple of critical cases in front of him and it could be another 4 hours before he is examined and a care plan is established.

We were able to pay the exam fee over the phone and go home for the night. We all knew that he was going to need to be put back under. The vet called us at about 1 am with her findings. It appeared that a large amount of tissue had been licked away but there was still enough they could confidently close it up. The plan was to flush with copious amounts of sterile saline, really give it a good washing, take a culture sample to make sure we are on the right course of antibiotics. The huge worry here isn infection. There is a high chance that there could possibly be a biofilm layer that even the strongest of antibiotics can not penetrate. There is also the chance of infection in the bone where the screws were inserted.
We agree on the treatment plan.

Tuesday 7/14/2020 I get a call from the emergency vet who did the wound treatment, and he is ready to go. We both leave work to go pick up our boy.
He was a little sore and groggy. We get him home and set up to rest for the remainder of the day.

Wednesday the 15th was his first day in his actual kennel as Camp Sampson was a huge fail. He is now in a plastic cone as the vet was not a fan of the donut.

We get a phone call from the emergency vet on Sunday the 19th of July and FINALLY! GOOD NEWS!!! Were on the right course of antibiotics. After a little back and forth with emergency and our vet, it is agreed that the emergency vet will refill the Amoxicillin/Clavamox.
He is using both limbs, weight-bearing, and the limp is decreasing little by little!

Everything is fine and dandy until last night. 7/23/20.
Sampson has dinner, cleans his bowl! At this point, it is his routine to go out and take care of business. We are in the back yard, he is close to me, hunches over to do his business, goes to stand back up, lets out a very loud “Yipe”, and now refuses to put weight on his right leg. The opposite of the leg that just had surgery.

I get him inside by basically stabilizing his hind end and get him on his bed. I give him his pain meds and additional as-needed medication.
He is on Carprofen twice daily, Gabapentin as needed, and Trazodone as needed. I call the vet first thing this morning asking if we can extend his appointment for a 2-week TPLO checkup, which is Saturday 7/25/2020, to include an exam on the right leg.

I am so worried they are going to make us go back to emergency tomorrow as the surgeon that does this surgery is a traveler to the clinic. It took us a month of waiting AFTER we were able to schedule the surgery.

At this point, we will do what we need to do for this poor dog! I feel so bad and feel like we are failing as parents.
I Will update as the story unfolds!