To prevent further injury, we needed to keep Beau quiet. No running, no jumping and lots of rest. We were given Metacam for pain and Acepromozin as a sedative. It just about killed me to see my happy, active dog so sleepy – even though I knew it was for his own good. And in between doses, he was all fired up! I learned quickly that keeping him quiet was going to be big challenge. He wasn’t limping much anymore, and I’m sure he’d forgotten all about it. As a dog who has probably had some minor pain with his hips for many years, I think Beau is tough and just pushes through. 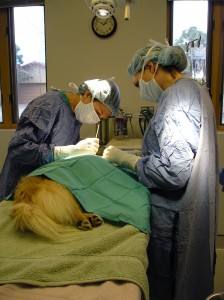 Because Beau would be favoring the leg and losing muscle tone, our vet suggested that we perform a Passive Range of Motion (PROM) exercise by gently bicycling his leg. We performed the exercise three times a day, followed by a massage on the rear back muscles and cold compresses to the knee area. Beau didn’t mind the massage or the icing, but he was definitely not crazy about the PROM exercise! We learned to do this exercise when the sedative was at its peak.

The three week waiting period also gave us time to figure out how to prepare the house for the months of recovery. We bought remnant carpeting to cover hardwood floor areas and we borrowed a gate to block off certain other areas. Stairs would not be permitted for some time, so we prepared to sleep in the living room with Beau. (Our thirteen year old son quickly volunteered for this duty, but I’m insisting that he take this job only on non-school nights!) We live in Ohio, and that means the months of December, January and February will be filled with snow and ice. With mandated leash walking, I wonder which one of us will be in for knee surgery next?! Time to load up on pet safe ice melter. We had some good ideas and some ideas that weren’t workable, but the upside of delaying the surgery was having the time to think the options through and prepare. And I, the neat freak, also used the time to adjust to the fact that my house would not be in order again for several months!

One thought on “Preparing Beau for CCL Repair Surgery”