Dash (65 lb Pit/Mix) blew out her CCL during a romp in Oct. 2014 at the dog beach. She was running like a maniac (hence her name) and all of a sudden she came up lame. We called the vet who told us to give it a few days before bringing her in. Within 4 days, her other leg went out. We brought her to the vet, who told us that both CCLs were torn, but that they could only repair one at a time. Surgery was scheduled for the following day. 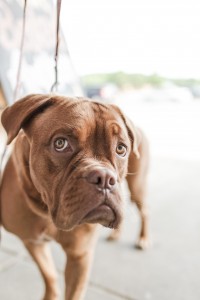 The vet performed a traditional repair (lateral suture). We weren’t informed of the type of surgery she was getting, or even that there was more than one way to repair a torn CCL. We adore our vet, but in this regard we’re concerned that she might have let us down.

Recovery was horrible to watch, but Dash came through it like a champ! She was toe touching by day 3 and able to support herself to go potty by day 2 (although mostly using her front legs as she literally didn’t have a good hind leg). Four weeks after surgery, we made our move from California to New York City, and the search for an orthopedic surgeon to repair her other leg began.

We found a great vet in our neighborhood, and after 6 weeks (now 10 weeks post op), she felt it was time for Dash to have a consult with the orthopedic surgeon. The consult was this past Wednesday, and the surgeon recommended the TTA procedure based on Dash’s size and weight. She also noticed some sideways movement in the repaired leg and warned us that in time, the repair is unlikely to hold up.

Surgery is scheduled for 1/16, and unlike her first surgery where we took her home the same day, she has to spend 2 nights in the hospital which breaks my heart. The surgeon also told us not to feel “prepared” based on our experience with the lateral suture, because the TTA is much more invasive, with more bruising, swelling, and pain.

Any advice on TTA repair and/or recovery would be greatly appreciated.