TTA is the abbreviation for tibial tuberosity advancement.  The TTA is among the newer techniques for cranial cruciate ligament repair of the canine stifle, making its appearance roughly 10 years ago. The TTA technique was developed in 2002 at the University of Zurich, and, biomechanically speaking, the procedure is very similar to the TPLO, without carrying many of the risks. In fact, the TTA is a simpler procedure for veterinary surgeons to perform than the tibial plateau leveling osteotomy, or TPLO, and works to correct the injured stifle without over correcting the angle – as TPLO often does.

During the procedure an incision about 4 to 6 inches will be made along the dog’s stifle to provide the surgeon access to the knee tissues. The torn/ruptured cranial cruciate ligament, or CCL, is completely removed and the mensicus is examined. The veterinary surgeon will determine at the time of surgery the extent to which the mensicus has sustained damage and will work to remove the injured tissue. The doctor will take care to only remove meniscal tissue that is damaged, as dogs with some intact, healthy meniscus tend to do better long-term than dogs receiving a complete mensicectomy. 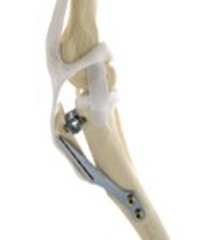 A transverse osteotomy is then performed just behind the tibial tuberosity (a non weight bearing part of the knee), which creates a groove in the bone, allowing the tibia to be advanced to its new position. The tibial tuberosity is then advanced to achieve a perpendicular relationship between the tibial plateau slope and patellar tendon, resulting in a stable joint. Examination of the stifle with a-ray radiography prior to surgery will make sure the surgeon has the proper size implants available for the procedure, and the advanced tibial tuberosity is held in place with titanium implants. Lastly, a bone graft is placed into the area of the osteotomy to stimulate healing and the incision is closed with sutures.