Charlie is a rescue mix, possibly Great Dane and Rott mix. He turned into a big boy at almost 4′ tall and 125 pounds. He loves running on the beach, swimming in the ocean or his friends’ pool, and chasing any ball or toy you throw. Despite all that I didn’t think he was a champion athlete that could blow out his ACL. I didn’t realize it was even possible in dogs, but now know how common it is. 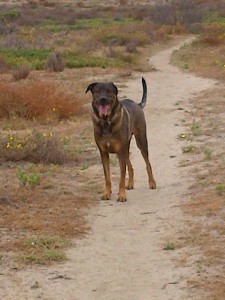 He was diagnosed in January 2012 was a partial or full tear and TTA was immediately recommended. I read EVERYTHING that I could, including everyone’s stories on this forum. It scared the crap out of me. But I continued to research it, and luckily was well informed because restricted duty wasn’t successful in healing him. I had tucked him under the dining room table with a metal pen around it so he couldn’t move around much during the day, gave up the beach runs and ocean swims. Nothing helped.

Finally surgery was scheduled for June 15. Today is June 17. The first day I was “prepared”. I had read EVERYTHING, right? I knew what to expect. Not true. But also I still didn’t think this was right. How could I have a surgeon cut his bone and rebuild his knee? What if it didn’t work? How could I make him worse to fix him?

So we went in anyway. Day one was what I expected. Except 15 times worse. When I rescued Charlie my world became his. I was truly his savior and he counts on me for everything. He loves everything and everyone, is very socialized, and adjusts to everything. But because his world revolves around me the vet asked me to stay with him until he was fully under. Then I was to go back as soon as surgery ended so he could wake up with me. The fear was that he’d wake up kicking and struggling, and possibly blow his knee within minutes of surgery. There is no end to how many things we can worry about but before surgery that one didn’t even occur to me. He came out and woke up well, but got a sedative just in case. His recovery was starting well. 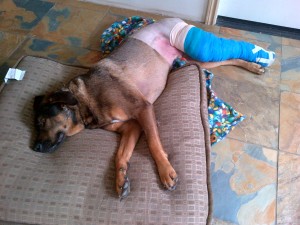 I took him home and realized he was still too sedated to feel anything so I worried he’d try to walk too soon. Instead the problem was moving him because of the sedative. He was too groggy. But he was home. Problem solved. However I realized the bigger problem quickly after getting home. He had so many fluids during surgery that the vet told me to take him out soon. My house has three steps down to the grass to get out. And his stomach had some shaving burns that really hurt him if I tried to towel support him. We’re off to a bad start. Finally after six hours of non-stop whining [and I mean NON STOP, to the point that I called the emergency room at 9:30 PM] it started to worry me. The ER told me that this is normal and he was just feeling uncomfortable, but he’d be fine to walk on his own and go outside. I knew that would be the end of his knee. Well, listen to the doctors. They are objective and clinical in their approach for a reason.

Around midnight I got him outside when I let him lead me. He was able to walk and let me tenderly help him down the three steps. He peed on a plant for about 3 minutes. Twenty minutes later he had to go again. So outside we went again. This time he stood on his surgical leg and peed! I almost died. It’s almost nauseating watching them do what they know they can do. But we have to let them.

Plan to sleep on the floor with them the first night, if they go home. They’re uncomfortable but they just want you there and they’re fine. He woke up every hour and I slept on the floor with him, getting maybe four hours of sleep over 9 hours time. But the ER nurse was right. 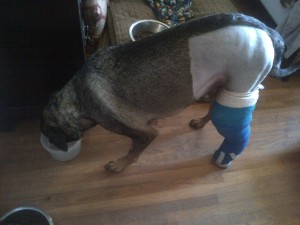 Day 1 and day 2 are night and day different. Day 2 he was dragging me out of the house and mentally 100% better. I had to slow him down, it was unreal. He just needs to be entertained now, but he’s totally better. I tried everything not to let him lie down on his surgical leg. I just knew he’d twist it wrong if he tried to lie on that side. Luckily he did it at night [despite my efforts to prevent it] when I was finally asleep. But he couldn’t get up to turn over so he woke me up around 3:30 AM to help him get to his other side. Not an easy task for a big 125 pound dog in the early morning hours with no sleep. But he was fine. He has since gone down on that side several times when I awake, and it’s still nauseating to watch. I keep waiting for something to happen. But he knows what he’s doing. They are amazing.

Now the hard part: time to listen to and follow instructions on what he cannot do. You can’t let them fool you into thinking they are done. I would never believe a week ago that he’d be fine on day two. But he is – mentally. However he is not healed physically. I have him restricted in a pen and on full rest. I don’t plan to leave him for a few days, but eventually will have to go back to work.

So by day three I’m already planning a short getaway to the store. It’s nerve-wracking just thinking about what could go wrong when I’m gone. But I even got a shower in today – the first in three days. These are big steps. But be careful – one bad move and his surgery could be all for naught. I put wood beams through the top of the pen to restrict him from standing. It’s a test to see if I can leave without him getting too excited and jumping when I return, or because he hears something outside when I’m gone. Because God forbid a dog go by the house that he doesn’t stand up and bark at. So I want him to stay down just in case he should get hurt in doing so. That doesn’t mean I just walk away though. 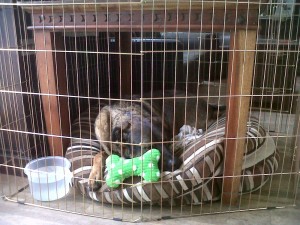 He is penned at all times in the same room as me, unless we’re on the leash outside on a pee break. I’m watching him like a hawk to see how he handles it all. Much better than me, I must say. And I’m not a worrier. This is new territory for me. But my baby is hurt, I can’t help it. Our other dog, his little “sister”, is his biggest admirer. She drives him crazy and loves him to death. [For her I’m just the concierge most days.] But she’s been an angel. She gives him all the room he needs, doesn’t bother him or me [while I pay attention only to him for two full days], and she takes it all in stride. They really do get it.

He gets his bandages off on Friday, exactly one week post-op. They were ready for him by Wednesday, but I feel it’s too early. So I got two more days. He’s only on day three, so I know he’ll be fine as long as I am. We are responsible for keeping their enthusiasm at bay. Without us the surgery will be a waste because they can easily injure themselves fast again, thinking they are better. So I will remain vigilant with him, and will try not to worry so much, but things are going great. Once another day or two passes I will touch base again on how he does.

I know this post is long, but I couldn’t read enough when I was deciding on whether or not to take the risk of TTA. It just didn’t feel right to do such a major surgery for a possibly torn ACL [I know it’s really the CCL, but now it’s a habit to say ACL]. As it turns out they did verify the tear, and found a torn meniscus too. To this day we have no idea how it happened. He just started limping one day. That was part of my concern. How did we go from three or four days of running on the beach, swimming all day and constant fun adventures to a life-changing surgery in a few months?

The surgeon my vet recommended speaks on TTA with the vet from the University of Zurich who developed the procedure, and the company that manufactures the hardware. So I realize now that our dogs are in good hands. We just need to make a good decision based on our research, our knowledge of our dogs, and on as objective a perspective as possible – not based on fear. It will work out.

Read up as much as you can. Ask questions of everyone. I can’t believe how many people I know have had this happen to their dogs or someone they know. My own brother had a Lab that had the tightrope done before TTA was an option. Find out as much as you can and learn from the good and the bad stories. Don’t let the information scare you. Learn from it. Let it all help you see what can go right and what can go wrong. Use it to your advantage. This post is mostly for me, as it’s very cathartic to write all of this down. It’s a very traumatizing time for them as well as us. Just take care and I’m sorry you’re reading this if it means your loved one is injured as well.