You are here: Home › TTA Surgery and Recovery to 1 Year – Dakota’s Story 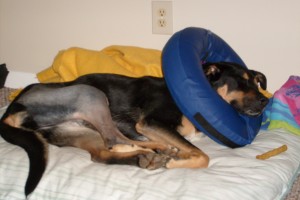 Let me introduce you to my baby Dakota. She is a 70lb Rotti mix with elbow dysplasia in both front legs and she had a fully torn CCL in her back right leg. Needless to say, she only had one good leg left. Because of this, we decided to have surgery. I met with a very expensive TPLO surgeon who was completely uncompassionate. I also met with a surgeon at my local vet who performs TTA surgeries. I decided to go with the TTA mainly because the surgeon was more understanding, and also because of less recovery time, less invasiveness, and less cost. We only paid $1800 for the TTA.

Wow this was SUCH a tough week. If your dog goes through this – you will overthink EVERYTHING. You will worry about EVERYTHING. But I promise, if you are a good, responsible pet owner – your dog will make it!

Dakota actually began bearing weight on her leg within 48 hours. This worried me because the take home instructions said that you should encourage your dog to use the leg after 2 weeks! I also was panicking because her staples started to come out after 3-4 days. I put her in gym shorts (as instructed by the vet) to keep her from getting to the leg and also put an inflatable collar on her (they do NOT work – her muzzle is too long).

Let’s see… what else did I worry about? Oh the dang dog wouldn’t use the bathroom forever! She would hold it for 24 hours at a time during the first week. Also, I do not have Dakota crated. She is an inside/outside dog that has never been crated in her life. So she stays in our very small, carpeted living room that is shut off with baby gates. That is her new home. She seems to be doing fine with it.

Went to the vet for staple removal. He confirmed the fact that I overanalyzed everything. It was FINE that she started bearing weight, and her incision was FINE. He said to take those dang gym shorts off of her and that stupid collar too because the inside of the incision had healed and she can lick it all she wants. PHEW. Major relief.

The vet was very impressed with how she was doing. He was able to manipulate her leg in ways that I thought would surely be painful, but he said that she exhibited no signs of pain. Range of motion therapy is usually recommended but he said that since she scratches her face with that leg and “scratches off” after she uses number 2 with both legs, that she is doing her own therapy and it would be pointless for me to do it. SO we started slowly walking after Week 2 and she did great with her walks.

All I can say is so far so good. No limping on the leg and she is walking better on it than before the surgery. Now we just keep increasing her walks and keep her quiet when she’s not walking on the leash. Oh and she is back to her old WILD self. Throwing her toys around and acting like a fool. I have to make her go lay down so that she doesn’t over do it!

The day Dakota was released to normal activity (after 12 weeks of strict leash-only activity – she tore the ligaments in the other back leg. Because that was the ONLY good leg she had left, and was most likely putting A LOT of weight on it – the surgeon wasn’t surprise.

The next month – Dakota was going for her SECOND TTA SURGERY. I will say that because of our experience with the first surgery – we BOTH did a lot better with coping. A year later, she is now a happy, healthy dog. The surgeon says her back legs look awesome. She now can run, chase, and jump till her little heart desires. She still takes deramaxx as needed and I keep her on Cosequin (glucosamine supplement for dogs). The surgeries were tough – but in the end – worth it!

Lesson Learned: Buy dog insurance for your pet BEFORE they tear their ligaments.