Cooper is an Australian Shepherd on the high energy side, as one of my friends (who isn’t a dog person) used to say, “Did you purposely pick the craziest dog?” At he age of 8, he still gives life 150% and can outrun most dogs at the park.

When Cooper was 2, he came back from the park after playing in extreme pain, not lame, just didn’t want to move. He was sedated and x-rayed with no drawer sign or visible problem to the knee, leading us to think it was back pain. We gave him pain meds and strict rest for 6 weeks. He recovered well but never 100%. He periodically went on bouts of rest, had further x-rays of his back, and visited a neurologist–all the while nobody could palpate drawer sign. During this time most people thought I was crazy; he still had lots of energy and was what most people would consider a normal dog, but I knew something wasn’t right. 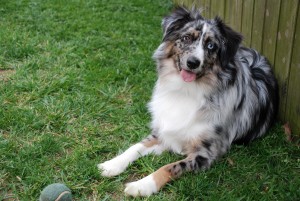 At 8 years old and running at the park, he yelped and came up lame, definite partially torn ACL. We tried rest & Cartrophen with no improvement. We visited the local ortho surgeon to discuss options and decided on TTA due to Cooper’s size and energy level. I prepared the house, borrowed an x-pen for my office, got a ramp for the stairs, a large soft-sided crate for the bedroom, and started keeping him confined two weeks prior to surgery. During this time I also started massaging the leg and practicing passive range of motion exercises to get him used to them.

We are now at week 3 and it has been a tough journey. The first four days Cooper whined constantly due to his Fentanyl high; I don’t think anyone really slept. On day 6 I had to go out for a couple hours, and despite an e-collar and confined in an x-pen, he managed to remove about 75% of his staples! We were off to emergency (an hour away) at 10pm. Now he gets a doggy sitter any time I have to leave the house.

Yesterday he had the second set of staples removed by the surgeon. He is not happy with his recovery rate, as the leg is not fully weight bearing so we have started a course of antibiotics in case there is any underlying infection due to the staple removal. I have been icing the leg since he came home, massaging and complying with passive range of motion exercises. I have slowly been increasing his walks as per instructions–we get out 3-4 times per day, started with just two houses and are now up to two blocks. This week we started warm compression on the leg, hopefully this combined with antibiotics will help. His surgeon wants to see him for x-rays in 4 weeks.

Ironically, his full sister tore her ACL a couple weeks after Cooper and had TPLO surgery done.

← Angus – Bilateral TPLO (or not?)
Conservative Management and Tightrope – Ellie →