You are here: Home ŌĆ║ Traditional Surgery for Large Breeds – Garth the Lab

My very active and large Labrador retriever partially tore his right CCL when he was only 9 months old. My vet examined him under sedation and the knee was stable albeit slightly more loose than the other side. He was put on 8 weeks of rest and Previcox. I leash walked him for the 8 weeks and allowed him free in the house and off lead to go to the bathroom but no running around or rough-housing. He continued to limp slightly at night until between week 6 – 7 when the lameness disappeared and hew as 100%. He then went on to have 5 months of very normal activity – running, leaping, playing, rough-housing. He also grew to weigh 110 lbs. 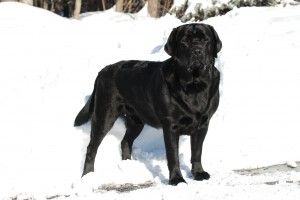 Suddenly when we thought we had it beat, the leg completely tore. He was holding it up and would not even place it down – hopping on three legs. He was seen by my vet, as well as an orthopedic surgeon who came highly recommended, and does both traditional lateral suture and TPLO surgeries and was trained by Dr. Slocum. Both advised (given his size and activity level) that a TPLO would be best – allowing him to recovery more quickly and with less risk of injury after surgery. I did not feel comfortable with the TPLO and opted for a traditional surgery.

I was advised that a traditional surgery most certainly does work well for a large and/or active dog, however, the first 8 – 10 weeks is critical for a successful outcome. The dog must not be allowed to do too much or else the wire can be stretched and break too soon causing instability due to not enough scar tissue. However the surgeon advised that once the scar tissue is formed that the knee is just as stable as if the dog had a TPLO. There is no more chance of a failure with a traditional once that scar tissue is allowed to build just because you have a big and active dog.

I was extra extra careful and did not allow my dog off lead for the first 10 weeks even in the house. He was in an x-pen in the family room and crated at night and leash walked 4 times per day. We went through a lot of bones and stuffed Kongs.

At 10 weeks I allowed him free in the house and quickly he resumed jumping on the sofa and bed and tearing around with my other dog despite me trying to keep him more quiet but he seemed fine.

At 13 weeks he did get away – ran and slipped outside. He came up lame again, however, two days of rest and he was fine.

At 4 1/2 months post-op he is doing terrific – can’t tell which leg had the surgery and he’s trotting around soundly and is allowed off lead. He is not back to rough-housing outside with other dogs at the dog park yet – not until 6 months post-op.

We are at the 5 month mark this week and he’s doing great – galloping off leash in the snow and going for 2 mile walks. A traditional surgery can be very successful for a very large and active dog.

25 Responses to Traditional Surgery for Large Breeds – Garth the Lab