By Mandie on July 26, 2011 in Dog Knee Surgery, Owner Experiences, Surgical Procedures, Traditional Repair
Baxter, our 23 pound Malti-Poo came inside from an energetic play session one night a few months ago with a significant limp. We were concerned of course, but by the next morning it had improved and largely disapeared a few days later. Over the next few months, he would occasionally start limping again for a few days, and then improve again. Our vet checked for all the usual suspects (Lyme, erlicha, hip problems etc.) and we tried a few weeks on steroids. Although the steroids helped, by this time Baxter had developed a persistant and obviously painful limp.

At this point, it seemed likely that his problem was structural and so I took him to see a vet that specialized in orthepedic problems. He spent a considerable amount of time asking questions about how his symptoms had appeared and progressed as well as looking over his medical records. Finally he examined Baxter’s leg and diagnosed a CCL rupture. He showed me as he examined him how his knee was moving to an extent and manner that was not normal. (and was obviously painful) 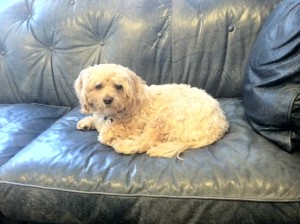 We discussed two alternatives, extended inactivity (also called Conservative Management) or a traditional extra-capsular repair. He said that smaller dogs often will recover with extended inactivity and without surgery, and that Baxter at 23 pounds was right on the line bteween where he typically recommended surgery vs inactivity.

Ultimately, given Baxter’s energetic temperment we decided that surgery would be a quicker and more reliable route to recovery.

This particular Vet would only consider traditional repair for Baxter and would not recommend TPLO or TTA. I don’t know if it was due to Baxter’s smaller size or his own experience, but he was quite adament about it. Given that this surgeon had done 200 to 300 of these proceedures a year for many years, I figured he knew what he was talking about and scheduled the surgery.

The surgery went well and Baxter did not need any miniscus removed. (a complication I was told was common) He stayed overnight at the vet and I took him home the next morning. I was very surprised to see him led out to me on a leash and walking with less limping than he walked in with! He was a little out of it the first day home, but continued to walk on the leg with some limping. By day 4, he would sometimes forget to limp if he was in a rush to get somewhere. (the refridgerator usually)

After 10 days, his stiches came out and he was allowed to start taking short walks although stairs, jumping, and playing with other dogs was still forbidden. As of today (21 days) he is doing great and although he sometimes limps as he walks around, he often doesn’t. He is also clearly in much less pain than before the surgery and hasn’t taken any pain medications since his stitches were taken out.

I was prepared by stories on this site and other resources for a much more difficult recovery for Baxter. I know that he is not “fixed” yet and that will still require many months of carefully monitored activity, however I was amazed at how quickly he has recovered to a happy and pain-free condition. I spoke to the surgeon about it and he admitted that Baxter was doing better than average, but that he had seen plenty of dogs recover as easily as he has.

I will try to update this as he continues to recover, but I wanted to get his story out to anyone considering this surgery. It can clearly be a difficult proceedure to recover from, but it isn’t always as bad as some of the other experiences shared on this site!

You would never know anything was wrong. It was a great thing to do and the recovery process went much easier than expected.

We work full-time and have 2 young boys, but kept him safely in a dog pen with the “cone of shame” on as long as necessary. Let him out to go potty and to walk. The walks also helped with some weight loss.

Kept him on a leash through week 12 – even when out of the pen so he couldn’t run around the house. It was not as daunting as I first imagined. I do cringe a bit now when I see him leaping over things in the yard and chasing birds!